I guide my priestly vocation according to “four dimensions.” They are found in John Paul II’s document I Will Give You Shepherds (or Pastores Dabo Vobis). PDV was written to the Bishops, Clergy, and Faithful. It provides a guide for priests and training for seminarians “in the circumstances of the present day.” The four dimensions are: 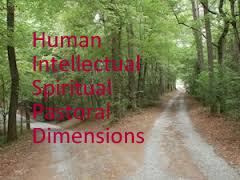 The Holy Father wrote that we never get this right. A “work-life-spirit balance” is a lie. At any one time, some aspect of your life will be “spot-on.” One, or many, dimensions will be “off.” Every week, I get emails, phone calls, and have personal conversations. I have opportunities to schedule people and activities. Daily (and I mean daily) I look at my calendar. I determine which of the four dimensions are “on.” Which needs more attention. I schedule my days according to that guideline. I adjust as needed.

I arrange my priestly assignment significantly according to what I learned in “Good Leaders – Good Shepherds.” GL-GS is a leadership course. It was specifically developed for priests/pastors by Philadelphia’s own Catholic Leadership Institute (CLI). Here’s the backstory. Around 2003-04, priests and pastors of the Archdiocese of Philadelphia had several conversations with the Archbishop. The topic was preparation and training for pastors and future pastors. Guys were struggling. We had practically no training in the practical aspects of parish life. The archdiocese developed an in-house program called “Pastoral Leadership Initiative.” It was open to all pastors. It also became mandatory for younger priests who sought to be a pastor someday. CLI was part of the program. They were integrating materials from a consulting firm called Leadership Legacies Inc. The consultants from LLI originally worked for a consulting firm. The company was led by the famous leadership consultant Ken Blanchard (author of The One-Minute Manager). PLI (in cooperation with CLI with help from LLI) was a decent program. There wasn’t anything like it “out there.” That was the good news. The bad news was that there wasn’t anything like it “out there.” There were no models and few best practices.

A number of priests from Philadelphia went through the program. At one point, it became evident that the skill set needed by the priest/pastors was beyond the capabilities of an in-house program. Now, the CLI/LLI partnership was developing what eventually became “Good Leaders – Good Shepherds.” GL-GS instructs priests/pastors in leadership in 5 areas: Leadership of Self, Leadership in the One-On-One Context, Leadership of Teams, Leadership of Parishes/Schools/Enterprises, Leadership of Strategic Alliances (government, non-profits, etc..). GL-GS was rolled out at (arch)dioceses around the country.

A few years later, CLI knew the program needed to be revamped. From 2006 – 2007, CLI pulled together a national team of about 16 people. The team included consultants, laymen and -women, academics, sisters and priests. In also included 3 priests from Philadelphia: Fr. Matt Guckin, Fr. Chris Walsh, and Fr. Charles Zlock. For two years, in 2-month segments, the team retook GL-GS. They offered critiques and suggestions. One month after each session, CLI took the ideas. They rewrote and published new materials. This new curriculum was then sent to the priests of the Archdiocese of Denver (whose archbishop at the time was a guy named Chaput).

How are these tools applied? Ministries and staff of St. Monica have incorporated the GL-GS tools over the past 6 years. They have formulated “Purpose Statements.” They have listed values and behaviors that need to be evident for the person or ministry to be fruitful. They have identified the big bucket areas on which to focus (called “Key Responsibility Areas”). They have attached S.M.A.R.T. goals to the KRAs) (Specific – Measurable – Achievable – Relevant – Time-Bound). They have assigned responsible people and have included budgets.

This process is hard! It’s expensive. It requires a significant investment of time and sweat equity. It requires constant vigilance by leaders to make sure what has been written and planned is done. It should be reviewed and redone yearly.