Homilies on the Book of Hebrews, Part 1. Where and How Is God Calling You?

Today’s Second Reading is from the book of Hebrews.  It is an important book. The church will hear from Hebrews today and over the course of the next five weeks. Let’s initially look at some historical material about Hebrews.

We date Hebrews about the year 85 A.D. The audience is a small, esoteric group within the Church, written to Greek-speaking Jewish Christians (Hence the title, “To the Hebrews”). Scholars suspect that the community was in Italy and probably Rome. Although no author is mentioned, in Hebrews 13:23 we see a reference to St. Paul’s companion, courier, prison mate and fellow-teacher, Timothy. This suggests some kind of connection to the circle of St. Paul and his assistants. It is interesting to note that Timothy’s mother was Jewish and his father was Greek. Thus, Timothy would have fit in very well with a Greek-speaking Jewish community.

What is the author’s purpose? Scripture scholars say that the author is writing to this groups because they’re “stuck.” The Community was established. It was nourished, if not by Paul, then one of his disciples.  The community showed such promise. But something occurred over time. It’s important to note that what happened to the group in contrast to other Christian communities. This community is not being persecuted. The members are not being martyred. As a result, their faith has stagnated instead of grown to Christian maturity. They’re wandering around listlessly. Their faith has grown routine and lukewarm. Others are in danger of apostasy – renouncing or abandoning the faith. This danger was due not to any persecution from outsiders but to a weariness with the demands of Christian life and a growing indifference to their calling (For example, see Hebrews 2:1; 4:14; 6:1–12; 10:23–32). 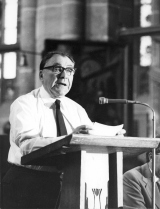 So the author of Hebrews has two goals. The letter is a kind of pep talk.  German scripture scholar, Ernst Kaeseman, claims that the author uses the symbol of the Church as the “wandering people of God.” The Israelites wandered in the wilderness between their departure from Egypt and their entry into the Promised Land. The current Christian community now exists “between the times,” between the Christ-event and the Second Coming of Christ. During this “in-between” time, the community has a task. They have a purpose. They have been blessed by the Lord. They are to be a blessing to others within the community around them. This leads to the second goal.

Hebrews is not merely a pep talk. It’s also a swift kick in the backside! The author is saying, “Get going. You have work to do.” Dominican preacher, Jude Siciliano, O.P. writes that Jesus preached with urgency the coming of God’s kingdom, which would enable a whole new way of living. People need this new way of living and thus need to hear this proclaimed by people like you. People need this new way of living and thus need witnesses – they need to see it modeled by people like you. You cannot afford to stop half way in the journey. Israel stagnated in the wilderness and was punished. How much worse will it be for the Christian community if it neglects an even greater salvation effected through the priestly work of Christ!

Author Reginald H. Fuller writes that the author of Hebrews “addresses with this situation by an elaborate exposition of the theme of Christ’s high priesthood”. This is a significant part of the book of Hebrews. It forms one of the most important sources of a type of theology known as “Christology.”  More on that in the weeks to come.

What are some lessons that we can take from this initial foray into Hebrews?

Aly Cox recently spoke at 2018 Youth Synod currently being held in Rome. During an event entitled, “Behold, I Make All Things New” Aly spoke about her conviction that Catholic Social Teaching is key to changing how the Church engages the world. 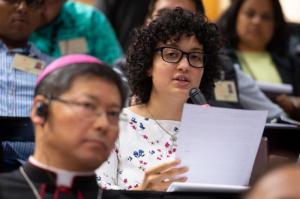 AT the synod, the first person under 30 to address the Synod of Bishops was Sister Briana Santiago. She is a 27-year-old member of the Apostles of the Interior Life from San Antonio. She said to the bishops, “We young people want dialogue, authenticity, participation, and to be welcomed by adults who are open and want to know what we carry in our hearts.” The desire to be recognized, accepted – and only then guided forward –  is something I have experienced on a personal level.

Father Steve Delacy, Director of Priestly Vocations for the Archdiocese of Philadelphia, recently spoke to a group of priest about our seminarians. He talked about two programs currently in place at St. Charles Seminary. One is called “Heed the Call.” This is a series of programs for men of various ages to enquire about possibly entering St. Charles Seminary. “Called by Name” is a program that allows people-in-the-pews to recommend young men who they feel might have a vocation. It also has materials that people can give to a young man to encourage him to consider St. Charles.

Fr. Delacy mentioned that St. Charles has more men in the seminary and are currently seeing more men inquire than they have in years. Why is that? In talking to current seminarians, they will say that they do not see themselves as modern day martyrs or heroes. They say, “This is the church today. This is the time into which I was born. This is the time that God selected for me. There is stuff in the church to get done. I guess I better get to it.

Sounds like a small Jewish-Greek community in Rome, doesn’t it?

From: Personal Ministry Updates
← Being Blessed – And Blessing Others. Homily 26th Sunday Ordinary Time
Benedict and Catherine -Part Two →
No comments yet