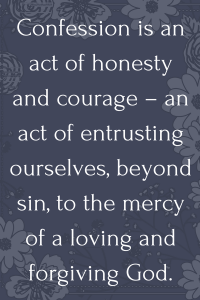 Last week we began looking into the the Sacrament of Confession. Swiss theological Adrienne von Spyer and Baltimore Cardinal Archbishop Donald Wuerl each wrote about this sacrament in the book Confession (von Speyr) and The Light Is On for You (Wuerl). In their books, both authors outlined different “types” of confession.  They described “confessions of conversion” as one type. They also wrote about the deep, complete and thorough “general confession.” Von Speyr cautions that both the penitent and the confessor need to be aware of certain challenges and dangers associated with these types of confession.

The first issue is after the penitent has had a significant conversation experience. They might consider serious sins of the past to now be no big deal. “Sure I did that, but that was then. I’m a new creation in Christ now. I don’t really have to emphasize the seriousness of that sin anymore.” This is clearly pride. The danger here is that this very same sin might rear up its ugly head again. This can really shake the faith of the penitent when that happens.  They might begin to question the validity of their entire conversation. They might begin to questions the power and the grace of Jesus Christ, which is exactly what Satan would want them to think. They might even give up on their faith altogether as if to say, “What’s the use. I’ll never stop sinning in my life.”

The other danger is to go in the opposite direction. The Penitent places too much emphasis on the sins of the past. Past sins are seen as too burdensome and inhibiting. The person thinks that nothing good will ever become of them.  In this case, they are totally discounting the love of God and the efficaciousness of God’s grace. They are also diminishing their value as being “created good” and “in the image and likeness of God.”

A third issue involves penitents who come into the confessional and begin to “tell stories” rather than confess sins. Confession should be comprehensive. But the priest does not need to hear the background, extenuating circumstances, long explanations and rationalizations. I personally see this in several cases. One is when I am hearing the confessions of young people, especially high school students on Kyros Retreats. We find in necessary to remind them before-hand, “Look, it’s confession. It’s not therapy! I want to know what. I want to know how many times. I don’t need the details.” 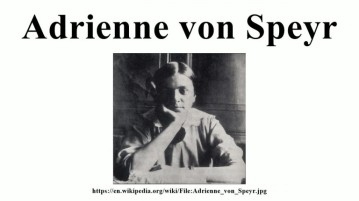 Von Speyr does point out other cases, where a priest-confessor senses that there is more to the story than is being revealed. This is usually done in all innocence on the part of the penitent. In such cases, a good confessor might ask questions for a number of reasons. First, is to examine the circumstances surround the sin. Second, since some penitents are ignorant of the nature of a sin, they might need to be instructed on the seriousness of the offense. Finally, such an inquiry helps to point out the effects of the sin in the person’s day-to-day life. This is a way to lead the penitent to more willingness, more nakedness, more submission in order to experience Christ’s mercy in a fuller way.

Finally, there are times when the Holy Spirit whispers in the ear of the priest-confessor, encouraging the priest to inquire whether the penitent might be holding back on something. Stories are told about St. Padre Pio and St. John Vianny, who possessed this charism to a significant degree. The rest of us “mortal” priest can usually pick up on something as well. In such cases, it is incumbent on us to be gentle with the penitent and encourage them whether there is anything else they would like to mention. When the penitent reveal something else, priests catch a sense of relief in the voice and demeanor of the penitent. The priest-confessor also senses an added joy and happiness of the person as they leave confession.

One final “type” of confession that Von Speyr mentions is what she calls the “Devotional Confession.” This is a very special confession celebrated when the penitent is on a retreat. I have personally been honored and privileged to celebrate such confessions. They are always special.

Anyone who goes on a spiritual retreat is taking their walk with the Lord seriously. This kind of confession is not so much about “cleaning house.” It is about maintaining the spiritual life within a particular sphere or moving the relationship with Christ to a higher level. What is especially enlightening about von Speyr’s insights, is the focus of such confessions. It is not about the sins of the penitent. They know they’re sinners. They know – and want – God’s grace.  Retreat penitents confess in order to leave the retreat, pray and sacrifice according to the intentions of the Church. They want to live as “sinners among other sinners,” to take part in the lives of others and make those lives better. A “devotional confession” is necessary to be absolved of sins, in order to approach others with pure hearts and intentions. Otherwise, the penitent is nothing more than a Pharisee. 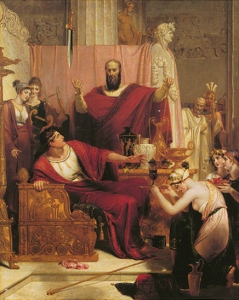 Follow-up on a devotional confession involves “apostolic responsibilities.” This usually includes daily prayer, spiritual reading and a demand for further purification. They tangibly feel that God has placed a claim on them. They live for the sake of others. Their work is to be considerable and effective.  They have – and know the need – to feel a spiritual “sword of Damocles” hovering above their head. They know that regular confession is necessary so that their heart and intentions remain pure.

“Devotional confession” also has its dangers. Some people on retreat might feel satisfied with themselves. They are easily convinced that they are not very great sinners.  (For me, an indication of this is when I hear, “I’m basically a good person. I don’t do anything really bad… like I haven’t killed anybody or anything like that…”). Others come to retreats and confession with pronounced scrupulousness.  Confession, retreats, spiritual reading, endless prayers attempt to compensate overzealous consciences.  Here is where “the art” of confession comes into play. The confessor must try to sail the straits between Pharisaism and over-scrupulous consciousness of sin. The priest-confessor must view everything from the perspective of the Son and the Holy Spirit. The priest must also guard against the very real dangers of his own human frailty. This is manifested as weariness, indifference and sacramental mediocrity.

The good news is that sincere retreatants, who seek out the grace of the sacrament during a retreat, do so with great hope and expectation. Speaking for myself, I feel that. It’s tangible. The penitent perceives this as a special moment and that the priest is doing a service for the Lord and his church. I need to be alert in the name of the Son and the Holy Spirit and concern myself with the manner of that service.

From: Personal Ministry Updates
← BigChurch vs. SmallChurch and the Story of Emily. Homily for Divine Mercy Sunday
Homily for 4th Sunday of Easter, Keys to Overcoming Rejection. →
No comments yet