St. John of the Cross – Advice On Conquering Self-Love – A Spiritual Reflection 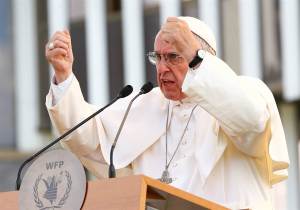 Father Tom Neal is the Academic Dean and Professor of Spiritual Theology at Notre Dame Seminary in New Orleans, LA. He penned an article that was featured on bishop Robert Barron’s website, Word On Fire entitled, “St. John of the Cross’ Advice on Conquering Self-Love.” In recent weeks I have featured articles concerning prayer and spirituality from Jesuits and Augustinians. I guess I should include some Carmelite spirituality as well.

Pope Francis recently cautioned that the biggest enemy of mercy is “self-love.” St. John of the Cross agrees.  St. John teaches that the greatest work of “Divine Mercy” is God’s work of overcoming our distorted “self-love.” Thus we might become capable of the selfless love that is the origin of mercy. Mercy, remember, is entering into our own discomfort and self-renunciation so that we might begin loving and seeking the well-being of difficult, needy, irritating, unattractive, unpleasant, smelly, nasty and unworthy “others.”

By self-love, neither John nor Pope Francis mean to disparage that healthy love for self that reverences all that is good in us and appropriately cares for our genuine well-being (c.f. Ephesians 5:29). Rather, both are disparaging that self-absorbed inward turning that thwarts the authentic good found in hard virtues, resists God’s holy will and prevents us from loving with the love of Jesus Crucified.

In his treatise Dark Night, John begins his discussion of the purgative phases of spiritual growth by using the Seven Capital Sins to analyze the extent to which the incurved ego remains alive and well in those who have made significant progress in prayer, have tasted of remarkable graces, but have not yet gone through the more mature developments in the spiritual life that require God to expose and purify their well-disguised spiritual narcissism. As a Carmelite priest I know says it: “What St. John calls beginners are those who won’t let God pluck out the spiritual lollypop He once placed in their mouth when they were small children. God gives us spiritual sweets when we are young to get our attention, but removes them when it’s time for stronger nourishment. Beginners at the threshold of deeper stages of growth fight God’s invitation to maturity kicking and screaming…”

Here’s a section where St. John describes the inner dynamics of Sloth in the spiritual beginner, and then refers to the “dark night” that God eventually leads them into in order to dismantle the machinery of self-absorption. These dark nights include both interior trials and exterior trials that strip away the “props” that previously supported the soul’s narcissism. Note the “self love” that still drives the slothful’s spiritual life:

“Many of these beginners want God to desire what they want, and they become sad if they have to desire God’s will. They feel an aversion toward adapting their will to God’s. Hence they frequently believe that what is not their will, or brings them no satisfaction, is not God’s will, and, on the other hand, that if they are satisfied, God is too. They measure God by themselves and not themselves by God, which is in opposition to his teaching in the Gospel that those who lose their life for his sake will gain it and those who desire to gain it will lose it.

Beginners also become bored when told to do something unpleasant. Because they look for spiritual gratifications and delights, they are extremely lax in the fortitude and labor perfection demands. Like those who are reared in luxury, they run sadly from everything rough, and they are scandalized by the cross, in which spiritual delights are found. And in the more spiritual exercises their boredom is greater. Since they expect to go about in spiritual matters according to the whims and satisfactions of their own will, entering by the narrow way of life, about which Christ speaks, is saddening and repugnant to them.

It is enough to have referred to the many imperfections of those who live in this beginner’s state to see their need for God to put them into the state of proficients. He does this by introducing them into the dark night, of which we will now speak. There, through pure dryness and interior darkness, he weans them from the breasts of these gratifications and delights, takes away all these trivialities and childish ways, and makes them acquire the virtues by very different means. No matter how earnestly beginners in all their actions and passions practice the mortification of self, they will never be able to do so entirely — far from it — until God accomplishes it in them passively by means of the purgation of this night.

From: Personal Ministry Updates
← Master Plan – HVAC
The 27th Sunday in Ordinary Time – The Homily →
No comments yet