The 11th Sunday in Ordinary Time – The Homily

What would it take for YOU to enter into a stranger’s home, uninvited – to a party on the “Main Line,” and in a totally unacceptable and embarrassing way, throw yourself at one of the guest’s feet and begin caressing and kissing them?

What would EVER compel you to do that?

If you let Jesus into your home, get ready to let go of the control. He’s going to begin turning things upside down. He is going to start overturning the tables, embarrassing the guests and make your life uncomfortable. So, when you know whose coming, what he’s like and what he’s going to do, and the doorbell rings and your husband, wife or kid peaks out the window and says, “Guess who’s coming to dinner,” under what circumstances would you find the strength to open that door?

Bill (his real name) has a brother and a sister Nadine (not her real name). Bill and his brother were incredibly successful and materially very well off. Nadine is different. Nadine is weird. Nadine is a truly, holy woman. She’s a mystic. Nadine prays, A-LOT! Once Bill and his brother were facing some challenges and they asked their sister Nancy to “pray for us.” After a pause, Nadine said, “Ok, I’ll do that. But I’m going to pray that the Lord gives you what you need, not necessarily what you want.” Soon afterwards, Bill and his brother lost everything. And I mean EVERYTHING! What would it take to go to Nancy and ask her again, “Pray for us?”

That Pope Francis – he did it again! From “Catholic News Service” out of VATICAN CITY reported that Pope Francis raised the July 22 memorial of St. Mary Magdalene to a feast on the church’s liturgical calendar. CNS writes:

A decree formalizing the decision was published by the Congregation for Divine Worship June 10 along with an article explaining its significance. While most liturgical celebrations of individual saints during the year are known formally as memorials, those classified as feasts are reserved for important events in Christian history and for saints of particular significance, such as the Twelve Apostles.

Why did the Holy Father declare this day a “Feast?” Four reasons: 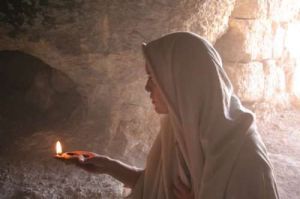 Was Mary Magdalene a prostitute as some claim? How about the sinful woman who washed Jesus’ feet whom we read about in today’s Sacred Scripture readings? Scripture scholars claim that this is not the case. Well, just consider any of the movie stars and socialites of today’s world who fill the supermarket tabloids and celebrity magazines with scandal and gossip. Are they prostitutes? Or are they just broken, lost souls possessed by decadence and sin, hiding their emotional pain behind empty illusions of vanity and glamor? The “sinful” woman – and Mary Magdalene who was possessed by 7 demons – were no different from any of the Hollywood stars … except for the fact that they knew their sins, they desperately wanted the situation – and themselves – to be different. Thus they were willing to throw themselves at the feet of Jesus. They knew how big the debt was. In each case, she found what she was looking for and they viscerally knew the immensity of their gratitude.

What does that kind of sudden, unearned, forgiveness and healing feel like?  Poet Marie Howe approaches it perhaps in the following:

The people Jesus loved were shopping at Trader Joes yesterday.

An old, lead-colored man standing next to me at the checkout

breathed so heavily I had to step back a few steps.

Even after his bags were packed he still stood, breathing hard and hawking into his hand.

The feeble, the lame, I could hardly look at them:

shuffling through the aisles, they smelled of decay, as if Trader Joes and Whole Foods and Wegmans

had declared a day off from the able-bodied,

and I had wandered in with the rest of them: sour milk, bad meat:

looking for cereal and spring water.

“Jesus must have been a saint,” I said to myself, looking for my lost car in the parking lot later,

stumbling among the people who would have been lowered into rooms by ropes,

on their hands and knees begging for mercy.

“If I touch only the hem of his garment,” one woman thought, I will be healed.

Could I bear the look on his face when he wheels around?

(Arranged from the poem ” Star Market” in her book, THE KINGDOM OF ORDINARY TIME by Marie Howe)

In writing about St. Mary Magdalene’s proclamation to the disciples are “words that open arrogant eyes.” Lovingly, gently, but like a fine recipe that includes spices that you taste with enjoyment but can’t quite figure out what it is …  with precision that is seasoned with mercy. They can’t ignore them because they are true, even if they are words that they don’t want to hear.  These are words that are messy. They call us to change our mind, our attitude. That turning and changing direction is called metanoia in Greek or conversio in Italian or repentance in English.

Jesuit Father John Kavanaugh, S.J. says that “Our resistance to repentance – parallels our resistance to receive love.” Receiving that love requires that we open the door and let Jesus in – and that is a messy proposition. “If we give ourselves to the mystery revealed therein; if we look at the sinful woman – a broken, lost soul possessed by decadence and sin, hiding her emotional pain behind empty illusions of vanity and glamor and say, “Yes, I believe that I could love her in such a bountiful way,” then we might then hear the words spoken to us that were once said to David. “Well, that story is all about you.”

From: Personal Ministry Updates
← The 10th Sunday in Ordinary Time – The Homily
Boredom and Dryness in Prayer – A Spiritual Reflection →
No comments yet