The 10th Sunday in Ordinary Time – The Homily

The best practitioners of love are those who know what it feels like to have been loved. The best confessors are usually themselves good penitents.  People who have almost died or have faced a life threatening situation are the ones who are grateful for life and live it to the fullest. People who have appositive experiences in the past often live out that positive experience in the lives of others in the future. 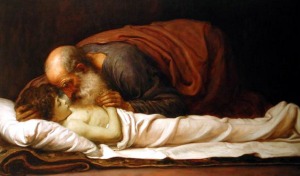 What kind of life did the son of the widow from Sidon live after being resuscitated by Elijah? How about the son of the woman from Nain? What was his life like after Jesus brought him back from the dead? American writer and Nobel laureate Eugene O’Neill wrote a play entitled “Lazarus Laughed.” It tells the story of how Lazarus laughs while he and other family members are threatened by death by Roman officials.

What is interesting about the miracles in the First Reading and Gospel is that the experience of both men was not a “resurrection.” Both would eventually die again. They had touched something of the “not yet” of our hope for eternal life, but not fully. They were still in the “now” or “already” phase of the human experience.

There is a biblical basis for the concept of “already and not yet.”  On the one hand, there is a sense in which God’s kingdom is already in force here and now in some capacity. Nevertheless, there is also the simultaneous feeling that the present spiritual reality does not yet match up with the future.

For example, in Hebrews 2:8–9 we read, “We see (Jesus) … crowned with glory and honor because of the suffering of death.” Yet in the same passage we also read, “At present, we do not yet see everything in subjection to him.

Romans 8:30 says we are “glorified” and Ephesians 2:6 says we are seated with Christ “in the heavenly realms” as if these were completed acts. But we don’t feel very glorified, most of the time.  Our surroundings do not much resemble “heavenly realms.”

Jesus’ parables of the kingdom picture it as yeast currently in dough that has not yet risen. He speaks of small seeds planted that have yet to develop into a fully grown tree. In other words, the kingdom is slowly working toward an ultimate fulfillment.

But how do we move further towards the Kingdom in our own lives?

Recently Pope Francis offered three messages to priests. His second meditation is entitled, “The Vessel of Mercy, Hearts Created Anew.” The Holy Father writes about three aspects of already and not yet mercy.

FIRST he says that, “The mercy of God is always “greater” than our consciousness of our sinfulness. The Lord never tires of forgiving us; indeed, He renews the wineskins in which we receive that forgiveness.  A heart that has known mercy is not old and patched. Christ uses a wineskin that is new and re-created, not one that is patched or old.”

The SECOND point concerning this new wine skin re-creation is that through it,

we enter more deeply into the mystery of Jesus, who is the Father’s mercy. But this mercy is not merely some emotion or feeling or thought. It is mercy that is incarnate.  There is a concrete symbol – a definitive icon – of this mercy, and they are the wounds of the risen Lord. Those wounds remind us that the traces of our sins, forgiven by God, never completely heal or disappear; they remain as scars.

His THIRD examines the scars as he says,

Scars are sensitive areas. They do not hurt, yet they remind us of old wounds.  God’s mercy is in those scars. In the scars of the risen Christ, the marks of the wounds in his hands and feet but also in his pierced heart, we find the true meaning of both sin as well as grace.  His heart, and our own, are similar: both are wounded and risen.  And as we contemplate the wounded heart of the Lord, we see our wounds reflected in His wounds.

But Christ’s heart is pure love and was wounded because Christ willed and chose to be so wounded. Our heart, is pure wound, but it can be healed when it allows itself to be loved.

Here is where the Holy Father gets practical:

The best practitioners of this kind of love, are those who know that they themselves are forgiven and healed and are sent to help others.  We see this with addiction counselors: those who have overcome their own addiction are usually those who can best understand, help and challenge others.  So too, the best confessors are usually themselves good penitents. Almost all the great saints were great sinners or, like Saint Therese or St. Augustine who knew that it was by sheer grace that they did not remain so.

In his treatise, From The Moral Reflections on Job by Pope Saint Gregory the Great, he writes that the,

Holy Church has been called “the dawn.” While she helps to turn back the darkness of sins, she begins to shine with the light of a life pleasing to God. In his writings, St. Paul does not say, “the day is come” but rather, “the day is at hand.” Thus he argues that although the darkest night has passed, the day as yet is not come. We find ourselves in that “in-between” stage of the already and not yet.

We see answers of these questions and echoes of “already and not yet” in the Bible and in the liturgical prayers of the Catholic Church:

So, in closing, here are three questions to ask ourselves:

From: Personal Ministry Updates
← Distractions in Prayer – A Spiritual Reflection
The 11th Sunday in Ordinary Time – The Homily →
No comments yet