The Sojouners: On the Saints, Part 2 of 2 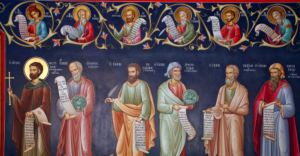 Last time I mentioned that some people believe they don’t qualify as a saint. They feel they’re not good enough, not holy enough, not talented enough. Let me provide an introduction to Blessed Herman.

You may be among the many who have not heard of Blessed Herman. “Herman was a son of the Count of Altshausen. He was disabled due to a paralytic disease from early childhood. He was born July 18, 1013, with a cleft palate and cerebral palsy and is said to have had spina bifida. Based on the evidence, however, recent scholarship indicates Herman possibly had either amyotrophic lateral sclerosis or spinal muscular atrophy. As a result, he had great difficulty moving and could hardly speak.

At seven, he was placed in a Benedictine monastery by his parents who could no longer look after him. He grew up in the Abbey of Reichenau, an island on Lake Constance in Germany. He learned from the monks and developed a keen interest in both theology and the world around him. At twenty, Herman entered their order as a Benedictine monk. He became literate in several languages (including Arabic, Greek, and Latin).

He wrote about history, mathematics, astronomy, and Christianity. He wrote a treatise on the science of music. He penned several works on geometry and arithmetics. He completed astronomical treatises including instructions for the construction of an astrolabe. (Some claim he was its inventor) As a historian, he wrote a detailed chronicle from the birth of Christ to his own present-day, ordering them after the reckoning of the Christian era. It was later extended by his pupil Berthold of Reichenau. He was renowned as a religious poet and musical composer. Among his surviving works are The Officia for St. Afra and St. Wolfgang. When he went blind in later life, he began writing hymns. He was famous enough that he appears to have been credited with musical compositions by later writers. Among the works traditionally attributed to him are the Salve Regina (“Hail Queen”), Veni Sancte Spiritus (“Come Holy Spirit”), and Alma Redemptoris Mater (“Nourishing Mother of the Redeemer”).

Herman, known as Blessed Herman the Cripple, died on Reichenau on September 24, 1054, aged 41. The Roman Catholic Church beatified him in 1863.” https://catholicsaints.info What a monk! The next time you pray the “Hail Holy Queen” give thanks to Blessed Herman.

“The Lord does not look at the outward appearance, but He looks at the heart (1 Samuel 16:7).”

Blessings and Peace to you as we journey together in Encountering Christ in Word, Liturgy, Charity, and Community. A Saint Monica Sojourner

From: Personal Ministry Updates
← Facilities, Finances and Future. 2nd of Two Webinars for the Parish of St. Monica
Spiritual Resistance: Initial Diagnosis →
No comments yet