Homily for 5th Week of Easter 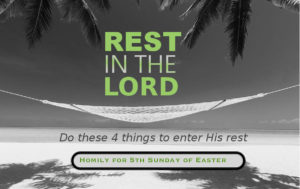 “Master, we do not know where you are going; how can we know the way?”

We find ourselves amid a worldwide sick day. People are asking a God question I used to hear when I lived in South Philly – ‘Yo, wadda ya doin?” It’s a fair question. People are looking for a plan, a manifesto, a message, a sign. You can’t blame them. There’s a lot of anxiety out there right now. Much of it is based on not knowing. We don’t know the direction, not knowing the timeline, not knowing the solution.

The Disciples were facing the same types of questions in today’s Gospel reading. Should they follow Jesus or not. There have been some good times. There have been miracles. There are also great risks following “the man from Nazareth.” What’s the plan Jesus?

Jesus doesn’t answer that question. He changes the direction of the conversation, and the solution. Jesus’ answer probably surprised, confused, and maybe disappointed the Disciples. Jesus’ message was misunderstood. The back-and-forth dialogue recorded by the Gospel writer indicates this. The following are four thoughts about Jesus’ answer.

1. It’s not about a plan. It’s about a person. It’s about a relationship. Relationships are an integral part of what it means to be a human person. Recently a group of about 20 people called close to 800 parishioners of St. Monica. Many people are feeling, at best, a little blue. Some are experiencing anxiety and depression. A good part of this can be attributed to a prolonged lack of close, physical, emotional, spiritual contact with others.

In conversations with Christ, this is called prayer.

Relationships are also hard. They are complex. So is a relations with Christ. ”The way“ described in the Gospel leads to walking a journey with another person – Jesus. It involves ups and downs, twists and turns, disappointments, and pleasant surprises. It is much like what the two disciples experienced on the way to Emmaus.

2. It’s not about what you do. It’s about what He does. It starts with Him. The point of departure for all other major religions of the world is humanity striving to try and reach God. Christianity is the only religion that goes in the opposite direction. The all-powerful and all-knowing all-present God of the universe decides to come down to us.

Jesus continues to do that to this day. The initial movement always is initiated by him. You don’t have to worry about getting lost or where God is. God is always looking for you first.

The name is strange. It startles one at first. It is so bold, so new, so fearless. [The name] does not attract, rather the reverse. But when one reads the poem, this strangeness disappears. The meaning is understood. As the hound follows the hare, never ceasing in its running, ever drawing nearer in the chase, with unhurrying and imperturbed pace, so does God follow the fleeing soul by His Divine Grace. And though in sin or in human love, away from God it seeks to hide itself, Divine grace follows after, unwearyingly follows ever after …

3. It’s not about the destination. It’s about the tour guide. In talking with parishioners, a new topic is being raised. It is a subject that is not commonly discussed by people. Many are talking about their own death. Perhaps that is not surprising given the current times. Many are thinking about it. They are discussing and mulling about and worrying about what happens next.

In today’s Gospel, Jesus assures us that he is going to take care of that. It reminds me of a conversation I once had with a friend. She was in New York City. As she was coming out of St. Patrick’s Cathedral, she was approached by a fundamentalist evangelist.

He asked: “When you die, are you going to heaven?

Him: “How can you be so sure? If you died today and met God face to face and God asked, ‘Should I admit you into heaven,’ what would you answer be?”

Him: “And if God asked ‘Why should I let you into heaven?’ What would your answer be?”

Maybe it’s better said – the kid knows you. In today’s Gospel, Jesus says, “Why would I go to such great lengths to prepare a home for you and then let you get lost on the way home? He is going to take care of you.

4. Rest and Receive. Robert is a member of my Men’s Gospel Reflection Group. Some months ago he found out that his father had contracted COVID-19. Bob’s father eventually passed away. Yet, in visiting and ministering to his father Bob also caught the disease.

It was a bad case. Bob is recovering but his recovery could be considered a miracle. Bob was literally at death’s door. In the midst of his recovery, he was quarantined. He could do absolutely nothing. He was that weak and incapacitated.

He told us the story that one day he was looking out the window. He happened to see a bird on a branch. The bird was singing. For a few minutes, Bob’s spirits were lifted. He forgot about the traumatic experience he was going through. For the next few days, he noticed several other birds that were singing outside. Then, much to his disappointment, they suddenly stopped. 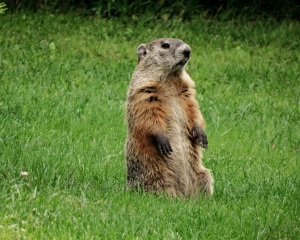 The same day the birds disappeared, a groundhog showed up. Some of the men in the group told Bob that he should have bought a lottery ticket. Perhaps the groundhog was “Gus – the Pennsylvania Lottery Groundhog.” The animal came back again and again. Each day, Bob looked forward to the appearance of a healthy living creature.