The Peace The World Cannot Give. Homily for the 27th Sunday in Ordinary Time

Jesuit priest, John Foley, S.J. has some interesting insights in the idea of “faith.” He asks,”

Do Moscow, Katmandu, Tokyo exist? How do you know? If you invite a boy- or girlfriend out to dinner, and they say that they will show up …

..do you believe that?

If so, then you have a conviction of things (or persons) not seen. This is the first or ground level meaning of the word ”faith.” It’s a simple one.

Perhaps you have heard someone say that God exists.

Do you believe that?

What about when something negative or tragic or traumatic happens in life. A trusted friend has turned away from you.  A child dies. Your spouse divorces you. You, or someone you love, receives an incurable medical report. In the midst of this tragedy we might hear “God loves you” or “It will all work out” or “This is all part of God’s plan.”

Do you believe that?

This is a third level of faith that we see in the First Reading.  Foley continues,

Habbakuk witnesses harm and speaks to God with great emotion. “How long, O Lord? I cry for help but you do not listen. Why do you let me see ruin? Why must I look at misery?” Level three faith is different. Level three is hard. These moments are terrible. Because of this, some avoid close relationships out of fear of betrayal. Some avoid – or have totally severed – their relationship with God – because this has occurred. Or people sever or avoid their relatiship with God because they are afraid that this could happen again.

Oblate Father Ronald Rolheiser tells a story about when he was at a symposium on young people.  The attendees were discussing the struggle that many young people have today with their faith. One of the participants, a young French Canadian Oblate, offered this perspective:

I work with university students as a chaplain. They have a zest for life and an energy and color that I can only envy. But inside of all this zest and energy, I notice that they lack hope because they don’t have a meta-narrative. They don’t have a big story, a big vision that can give them perspective beyond the ups and downs of their everyday lives. When their health, relationships, and lives are going well, they feel happy and full of hope; but the reverse is also true. When things aren’t going well the bottom falls out of their world. They don’t have anything to give them a vision beyond the present moment.

This weekend I attended the celebration of the 125th anniversary of the Penn Newman Center – the oldest Newman Center in the United States. I was the chaplain there between 2005 and 2008. There were a number of panel discussion on a wide variety of topics:

Lots of good news. Lots of great stories, Lots of hope. Lots of light. Yet, there were shadows also. One interesting statistic that we heard was that the number one issue that students on campus are facing – is loneliness.

Bishop Barron wrote about his experience of recently engaging (mostly) young people through the use of something called an “AMA” or the “Ask Me Anything” feature of the app “Reddit.” Barron writes:

When I engaged in the exercise last year, I received almost 12,000 questions and comments, making mine the third most commented-on AMA after those of Bill Gates and Jordan Peterson. This time, I’ve received over 15,000 comments and counting, making 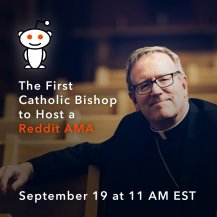 mine the second most commented-on AMA of the past year, just after Bill Gates and ahead of Bernie Sanders. Four major themes came through. Each of these issues was addressed hundreds, perhaps thousands, of times.

Leah Libresco has worked as a statistics professor, a data journalist, and a probability instructor at an organization teaching “defensive driving for your brain.” She grew up as an atheist, until she picked fights with the most interesting – and wrong – people she could find at Yale University. Then she converted to Catholicism. Her writing has appeared in The Washington Post, First Things, The Weekly Standard, The American Interest, The American Conservative, America and other outlets. She has spoken across the United States, as well as Australia, Ireland, and Poland. She recently published two books, Arriving at Amen: Seven Catholic Prayers That Even I Can Offer and Building the Benedict Option: A Guide to Gathering Two or Three Together in His Name.

At the Newman Center celebration, the atheist statistician convert said, “The solution to all that people are struggling with is Catholicism – or Nihilism. We also need to know that we do have an answer to pain and loneliness and tragedy.”

It is a faith that can only be gained within the context of the Church. That means a faith that walks a journey – with the pain on one side of you – and someone else on the other. It is a God-awful mystery of sin and punishment – and repentance and restoration. It is cross – followed by resurrection. It is compassion from the Latin “cum – passio” … to “suffer with” someone who is in pain and whom has been given to you by God – not to solve their problems – but to simply walk a journey with them until both of you are on the other side of Calvary.

Libresco said that, “We also need to let others know that we do have an answer to pain and loneliness and tragedy.” His name is Christ. He still loves you – even if you don’t feel it.  He has a vision for you life – even if you don’t believe it. He’s that person who will hold you tight and say to you the words of Habakkuk- again and again and again – “My vision for you still has its time. It presses on to fulfillment, it will not disappoint; if it delays, wait for it, it will surely come.”

And I am staying with you – until it does.

From: Personal Ministry Updates
← Forming a Healthy Disciple. Part 4 – THE EARLY YEARS
Gifts and Charisms →
No comments yet