In the Gospel reading from Luke, in verse 50, Jesus mentions a “Baptism.” The root meaning of the word is purification, regeneration, or change. let’s look at the idea of change.

Consider the difference between “change” and “transformation.” Change is a reorientation. Transformation is a radical conversion. Jeremiah was not asking the King and Israel to change, to do some small accommodation. He was looking for a revolution, a total about-face. Gut it all and let’s start in a totally different direction. 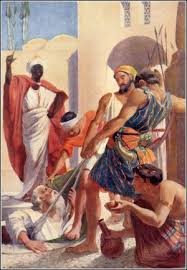 As an example of a radical transformation, let’s look in the First Reading of the person of Ebed-melech. The etymology of his name comes from ”abad” meaning “to work or serve,” and ”melek” meaning “king.” The deeper meaning could be “Slave Of the King.” Another interpretation could be “Servant Counselor.” Which is it? Or could it be both? Let’s examine how his life seemed to be transformed.

At one time in our life, we have been Ebed-Melech. In school, were you unknown, unpopular, invisible, a poor student, a poor athlete, a person with little hope?

I taught at Archbishop Wood High School from 1998 – 2002. On the first day of school I would introduce myself to my students and then play “5 Questions.” I would let the

students ask anything about me. that way they could get an idea who this guy was in black in the front of the classroom. I then asked the students to introduce themselves to each other. We went around the classroom. Each student told something about themselves that most people wouldn’t know.  One girl said that she was a dirt-track, race car driver. You could see where the opinion of the other students – especially the guys – changed. She was no longer invisible. From that moment, her reputation had been transformed.

Adults in the congregation might see themselves as “just” husband/wife, mother/father. In their job, their neighborhood, among acquaintances, among colleagues – they might feel unknown, unpopular, invisible. They are not hitting their bosses’ expectations. They are not at a place that they thought they would be at age 30, 40, 50. They’re coasting with little hope and no purpose.

Walking With Purpose was started by a woman named Lisa Brenninkmeyer. She was a wife and mother of seven. She was busy, but her life had become flat. As a convert to Catholicism, she decided to start a women’s Bible Study. She soon found that other women in her neighborhood were struggling. They felt that their busy lives had little purpose. They were anxious about their marriages, their health, their lives, their families and their jobs. They wanted to connect with other people and find a way to connect with Christ and their faith. Thus Lisa founded Walking With Purpose.  This little “Bible Study” has transformed the lives of thousands of women.

God is not on the clock. Our Mighty God has a higher purpose for you. The swamp you find yourself in, the crosses that weigh heavy on your shoulder now – they are not tripwires. They are stepping stones towards a higher purpose.