The Kingdom, Anthropology and “Stressed” Jeans. Homily for 18th Sunday in Ordinary Time

The definition of Anthropology:

I recently walked into a local store called Anthropology. They had a pair of jeans there. The cloth was faded. They were torn with holes at the knees … in both legs. They cost $150 ….. ON SALE.

So I would like to add my own addition to the definition of Anthropology:

“Vanity of vanities, says Qoheleth in today’s First Reading. All things are vanity!“

Understand, I’m not against having stuff. I am a hard-core, John Paul II, Centessimus Annus, free-market type of guy. Centessimus Annus was the Pope’s encyclical on economics, labor, private property and politics. I learned this from a priest named Robert A. Sirico. 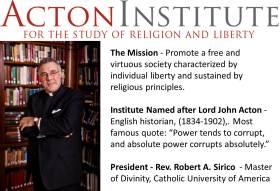 Robert A. Sirico is the Pastor of Sacred Heart of Jesus Parish in Grand Rapids, MI. He is also the co-founder of the ”Acton Institute” – a think tank he founded in 1990 with Kris Mauren. This was an era when liberation theology was in vogue.  The U.S. Catholic bishops were issuing pastoral letters heavy on government but light on liberty. The institute is named for Lord Acton (1834-1902), a towering British Catholic intellect whose two great causes were liberty and religion. In the spirit of Lord Acton, the Institute preaches the virtues of economic freedom and religious liberty.

Father Sirico was recently featured in an article in the Wall Street Journal.  He says, “It’s not just rah-rah for markets—or freedom,” Father Sirico says. “It’s to ask: What is freedom for? And to answer that question, you have to understand what man/woman is for. We have to be about more than making money and expanding choices. Materialism and markets require a ‘telos,’ a sense of higher purpose—of how human beings should use their freedom.”

“For what profit comes to man from all the toil and anxiety of heart.” The men in my

Gospel Reflection Group were talking about this line. We asked, “Do people really care how many rooms are in your house, the car you own there place you vacation? Young people, do people in your school really care about the jeans you wear, the people you hang around, the version of Smartphone you just got? OR, how much of that is just your perception that they’re putting that kind of status pressure on you? That is true “anxiety of the heart.”

So how do you overcome this? Take a look at the Psalm:

Part two: “Teach us to number our days aright, that we may gain wisdom of heart.” In Greek mythology, the Sirens were creatures that sang beautifully, luring those passing by to their deaths. A 10-minute homily during a 40- or 50-minute service is not going to help you reduce the anxiety of the heart. The world is too powerful. Madison Avenue is too clever. You will not be “fine” which is fearful, insecure, neurotic and emotional. You will succumb to the melody of the Sirens and you will remain depressed and anxious. Wisdom of heart means doing your religion homework outside of now.

Third, our Lord says to, “Put to death, then, the parts of you that are earthly: immorality, impurity, passion, evil desire, and the greed that is idolatry.  Take off the old self with its practices and put on the new self.” Go to Confession- every month. You cannot pursue God’s voice if your spiritual ears are clogged.

Understand that God does not hate stuff. He created it and so, by definition, “It is good.” It’s about where the stuff is on your priority list. Matthew 6:33: “Seek first his kingdom and his righteousness, and all these things will be given to you as well.” 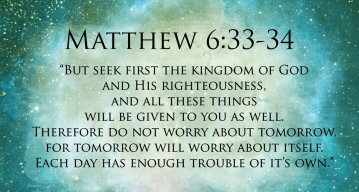 From: Personal Ministry Updates
← Introducing Deb Rojas
Letter to A Suffering Church – Part 1 of 2 →
No comments yet