Liturgical Catechesis: During the preparation of the gifts on the altar, why does the priest sometimes say the words … “Blessed are you, Lord God of all creation …” and sometimes he doesn’t?

Over the past few months, there have been a number of facilities, maintenance and repair activities completed on the parish campus. Last week I began to outline what has been done. This week, I finish the report.

Painting, Parish Center: The lobby of the Parish Center, leading to the Hagenbach Room and gym, were painted over the past two weeks. In addition, one of the first floor rooms off of the cafeteria as well as two of the 3rd floor rooms used for Religious Education also received new colors. The color scheme was chosen to match the same colors as the Hagenbach Room to lend a consistent look-and-feel to the first floor rooms.

in the 3rd floor needs to be replaced. Some sections of the house also need new drywall. Plumbing issues in the basement were also addressed. Being so close to several trees, the issue of ingress of small animals into the house is also being addressed. Also, roof estimates are being gathered due to the age of the roof.

Playground Fence: Some sections of the fence were in need of repair. Vendors were contacted and several bids were evaluated. In the end, the decision was made to do the repairs in-house. The project has been completed.

Cleaning Service: An examination of the cleaning services utilized was recently performed. Cleaning services need to cover the rectory, the church, the Parish Center and the spaces utilized by Regina Luminis Academy. A cooperative analysis was done by both organizations with oversight by the Parish Finance Council. In the end, an agreement was reached to enter into a contract with ASC Cleaners.

Landscaping: Three proposals were examined and an analysis performed. In the end, the decision was made to continue contracting with Doyle and McDonnell for the parish campus landscaping. Doyle and McDonnell will also be responsible for maintaining the St. Monica Cemetery.

Cemetery: Some additional information from last week – 43 of the most serious sites/grave markers were selected and rectified. A second phase is planned for later this year as well. 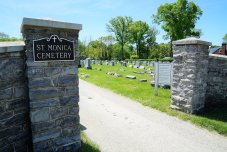 From: Personal Ministry Updates
← Stewarding the Mission
Homily for the 7th Sunday in Ordinary Time →
No comments yet