LITURGICAL CATECHESIS: What is the significance of the various colors? (Part 2 of 3)

Continuing with the use of liturgical colors … White symbolizes: purity, joy, light, glory. It is used during Christmas and Easter seasons; Holy Thursday; the solemnity of the Most Holy Trinity; the feasts of Our Lord (excluding those relating to His passion), the Virgin Mary, the angels and the saints who are not martyrs; and the feasts of All Saints (Nov. 1), St. John the Baptist (June 24), St. John the Evangelist (Dec. 27), the Chair of St. Peter (Feb. 22) and the Conversion of St. Paul (Jan. 25). White is used at nuptial Masses and baptisms, and may be used at funerals. White also is allowed for days special to a given parish or region, such as a parish feast day or anniversary, or Thanksgiving Day in the United States. Gold or silver also may be used for solemn occasions. 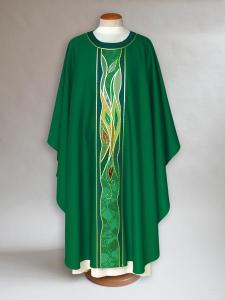 Green symbolizes: hope, life, anticipation. It is used during “Ordinary Time,” a season focused on the Lord’s three-year public ministry, His teachings and miracles; a reminder that the mission of the church is to share the hope and life of Christ with the world.

Last week I referenced an article from the New York Times. The article was entitled “It’s Getting Harder to Talk About God – The Decline in Our Spiritual Vocabulary Has Many Real-World Consequences.”  The author was Jonathan Merritt. He feels that there are some real-world implications concerning the fact that religious language is on the wane. He wrote about this in his book, Learning to Speak God from Scratch: Why Sacred Words Are Vanishing–and How We Can Revive Them.

America is known to possess a “religious” or at least a “spiritual” culture.  Yet Merritt states that “millions of Americans—more than three-quarters of them, actually—are not speaking God often. One-fifth of respondents admit they have not had a spiritual conversation at all in the last year.  Six in ten say they had a spiritual conversation only on rare occasions—either “once or twice” (29 percent) or “several times” (29 percent) in the last year.

The author partnered with the Barna Group, a prominent social research firm focused on religion in America. He writes that “More than 70 percent of Americans identify as Christian, but you wouldn’t know it from listening to them. An overwhelming majority of people say that they don’t feel comfortable speaking about faith, most of the time. Despite widespread religiosity, a paltry 7 percent of Americans say they talk about spiritual matters on about a once-per-week basis (more than fifty times in the past year). That means that for most of us, our conversations almost never address the spirituality we claim as important.

Merritt dove into the details to examine whether specific religious words were being used less frequently. When he looked at how often words such as “grace, mercy, wisdom, faith, sacrifice, honesty, righteousness and even evil were used, he found a 74% decline in the use of these words.

Why is this occurring? The author cites a number of reasons. The first reason was the orientation of respondents to organized religion and faith. “Nearly a quarter of respondents said, ‘I’m not religious and I don’t care about these kinds of topics” (23 percent).”  The reason is that “many Americans feel religion is often judgmental, hypocritical, unwelcoming of doubts, oppressive to women, opposed to science.” For example, “Millennials are more likely than any other age group to have friends who are different from them—different ethnicities, different religions, different social and political beliefs. Therefore, they are likely more sensitive to coming across as judgmental toward those groups… More and more young people leave the church because of the judgmental, simplistic, exclusivist teachings of churches that are unfriendly to matters like doubt. ‘God’ is a nearly heartless monster who almost relishes punishing people. ‘Faith’ is an insurance policy that provides postmortem fire protection. Just sign on the dotted line. ‘Conversion’ is a decision driven mostly by fear. ‘Joy’ is ancillary. ‘Grace’ is more rational than beautiful. ‘Mystery’ is, well, not part of the equation…

A second reason was the politicization of sacred words. “For every American who is reticent to speak God, there is an American politician with the opposite problem. Sacred language has been politicized, which is why many people say they are abandoning it. Turn on your television in any election season, and you’ll likely hear a candidate speaking God. The ubiquity of religious language in political speeches is an American tradition, but the way these words are twisted for partisan ends.”

A third reason was the exploitation of sacred words. “Religious leaders who mishandle or misuse sacred words can deeply damage people’s lives.” Merritt gives the example of a woman named Danielle. “After being physically abused by her husband, her pastor told her that she just needed to “pray more.” When desiring to bring people to Christ, overzealous evangelists believe that the most ‘loving’ thing they can do is tell their ‘lost’ friends that they are going to hell.”

But then, Merritt mentions a curious – and hopeful – finding. “Younger generations are having more spiritual conversations than older generations. In fact, millennials are having more conversations about “religion” or “spirituality” than any other generation. But they aren’t using “religion words” in their conversations. The issue for them, one researcher found, “isn’t a lack of courage. They aren’t afraid of being rejected or ostracized by nonreligious friends. Rather, they aren’t totally sure what the words mean or whether they believe they are as true as they once thought.” 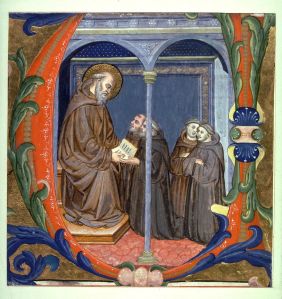 Merritt uses the phrase “fire-carriers” as people who carry the embers of religious language into society looking for words – and examples – of grace. Unfortunately, too many “have decided to extinguish their torches. But a lingering question remains unanswered: So what? Why does it matter if we speak God anyway?’ I’d like to pull some specific examples from Merritt’s book, and compare them to some passages from St. Benedict, specifically from “The Rule of Benedict.” Let’s see if the language of one of the ancients of our faith can be synchronized with the words of a modern linguist.

From: Personal Ministry Updates
← Learning To Speak God: Hearing St. Benedict With New Ears (Part 2)
The Second Week of Advent – The Homily →
No comments yet