Benedict and Catherine, Part 5. The Second and Third Stages of the Spiritual Journey 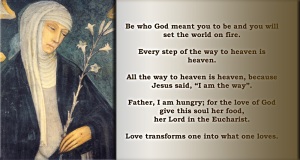 LITURGICAL CATECHESIS: What is the Penitential Act and why do we use different ones?

The Penitential Act follows the greeting. At the very beginning of the Mass, the faithful recall their sins and place their trust in God’s abiding mercy.

There are several options. The celebrant makes the decision. It is recommended that different “Penitential Rites” be utilized during different liturgical times of the year. This way, what we say and hear symbolizes that we are in a different “season.” For example, during Lent, I say “Lord have mercy, Christ have mercy, Lord have mercy.” During Christmas, we say the Confiteor (“I confess to almighty God …”) because it calls for a sung “Lord have mercy” response to follow. This indicates the higher solemnity of the season. During Easter, we also use the Greek “Kyrie Eleison” (a Greek phrase meaning, “Lord, have mercy”). This indicates the solemnity of the season and distinguishes it from the Christmas season. This 3-part litany recalls the three Persons of the Trinity offering God’s merciful actions. Further information can be found on the website.

LITURGICAL FEEDBACK: Last week’s question. How audible was the homily? Results were positive. 92% – 94% responded that the homilist at the 5:00 Vigil Mass, the 7:30 and 9:30 Sunday Masses could be heard well. What was interesting was that only 78% responded positively at the 11:30 AM Mass. I preached at the 11:30 Mass and it was relatively empty. Hence the “echo effect” was quite pronounced.

People also said that the organ seemed too loud. In speaking with the organist afterwards, he mentioned that he used the same organ “stops” and played at the same level at the 9:30 Mass (which was packed!). Here is where this information proves valuable. Now we realize that we need to be more sensitive to the acoustics depending on how populated each liturgy is. I thank those of you who participated and encourage you to continue to do so in the future. On to Catherine of Siena… 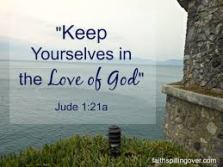 Last week I mentioned that God is pleased with his children who come to him with an aversion to sin and feel sorrow and shame for their transgressions. This is a spiritual posture for people at the beginning of their spiritual journey. People who are more advanced progress even further by their openness and acceptance of God’s love. In The Dialogue, Catherine writes, “Some there are who have become faithful servants, serving Me with fidelity without servile fear of punishment, but rather with love.” This is the “second stage” of the spiritual journey.

But, just when you thought they could relax, God throws them a curve ball. In the excitement of the moment, people in the second stage have a tendency to become proud or complacent. They serve God with great fervor but do it because it profits them. Catherine explains what happens next, “This very love, however, if they serve Me with a view to their own profit, or the delight and pleasure which they find in Me, is imperfect. “Do you know what proves the imperfection of this love? The withdrawal of the consolations which they found in Me, and the insufficiency and short duration of their love for their neighbor, which grows weak by degrees, and oftentimes disappears…I withdraw from their minds My consolation and allow them to fall into battles and perplexities. 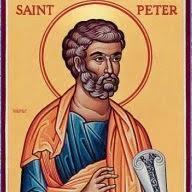 As an example, Catherine offers the story of St. Peter. “It was with this imperfect love that St. Peter loved the sweet and good Jesus, My only-begotten Son, enjoying most pleasantly His sweet conversation, but, when the time of trouble came, he failed, and so disgraceful was his fall, that, not only could he not bear any pain himself, but his terror of the very approach of pain caused him to fall, and deny the Lord, with the words, ‘I have never known Him.’

What is God’s goal in this? I’ll go into that next week.