Homily For The 5th Sunday of Easter, Bearing Fruit – Being Alive 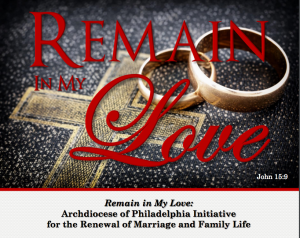 Todays Gospel is taken from the 15th chapter of the Gospel of John.  The very next line (John 15:9) is “As the Father loves me, so I also love you. Remain in my love.” Remain in my Love is the title of an initiative on marriage that was recently announced by the Archdiocese of Philadelphia. Recently the priests of the archdiocese attended a series of workshops on this initiative.

One of the words that the presenters at the workshop emphasized is munera.  This Latin word was originally used in Rome and was defined as a public utility for the benefit of the citizenry. It was not just about a person doing a service project. This was something bigger, an individual vocation, obligation, call to something greater, service, contribution. It wasn’t something done on your own. It was a call given from a higher authority. the idea of a munera goes to “identity – relationship – mission.” It was a word that was used over 250 times in the documents of Vatican II. the idea obviously was important to the Council Fathers.

In today’s Gospel of John, we hear Jesus say, “By this is my Father glorified, that you bear much fruit and become my disciple. Whoever remains in me and I in him will bear much fruit.” What does fruit bearing look like within int context of marriage? We can take a hint from St. Irenaeus who said, “The glory of God is man fully alive.” A fully alive marriage has: 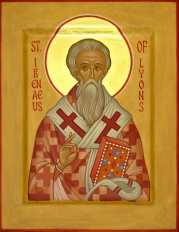 A fruit-bearing Disciple is one who has a life that, resounds with meaning. It exudes joy. It positively impacts others. It profoundly changes this world for the better as Christ’s own life did. It is a life whose meaning and impact overflow into eternity.

We also know that there is often  a gap between the kind of spouse we would like to be, and the kind we actually are. We know a follower of Christ should be patient, self-controlled, faithful, generous, the kind of virtuous ideal that we so often hear at weddings (1 Corinthians 13). We also know that although we follow that recipe sometimes, many other times we don’t. In the face of this contrast between the desire of our hearts and the reality of our daily lives, we can be tempted by frustration.

3 key take-always from today’s Scriptures deal with this:

In today’s First Reading, the Church gives us an antidote to that frustration in the example of St Paul.  St Paul shows up in Jerusalem three years after his dramatic conversion on the road to Damascus. He has been believing in – and following Christ – for three years already. And yet, he arrives in Jerusalem, and what happens? His bold and abrasive personality gets him in trouble right away. He shows up full of faith and love for Christ, overflowing with zeal and sincerity. But his old violent and intimidating temperament hasn’t gone away. In a matter of days,

The great St Paul didn’t become a saint overnight – it took time for God’s grace to transform him. He messed up – a lot. When it comes to a faith-filled marriage, a marriage identified my munera, couple can be a gentle on themselves. By believing in the validity of their call, by abiding within their relationship with God, by relying on sacramental grace – God’s grace will begin to transform them.

Michelangelo worked full-time for four years painting the Sistine Ceiling. And the whole time he was working, Pope Julius II was pressuring him to finish, to work fa 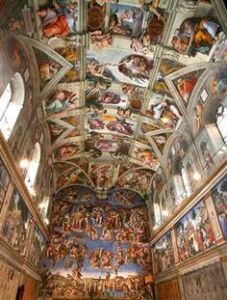 ster and faster. But Michelangelo, though he worked long and hard hours, even painting by lantern-light late into the night, lying on his back on top of rickety scaffolding, refused to rush his masterpiece; he refused to compromise the quality of his work; he explained to the pope that if he wanted excellence, it would take time. It eventually took four years.

From the pope’s perspective, four years seemed too long to wait. But it was nothing compared to the 500 years that have since passed, during which the incomparable masterpiece has inspired millions of men and women from every corner of the world.

God is like that with us. God is the artist of our soul.

From: Personal Ministry Updates
← Confession Is Not Therapy – A Spiritual Reflection
Discipleship 1 – An Introduction →
No comments yet