The Homily for the 28th Sunday in Ordinary Time 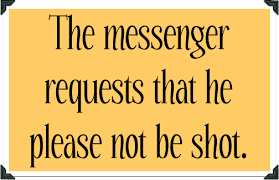 Why kill the messenger? It was a wedding invitation after all as we read in today’s Gospel! Nevertheless, even today, when we try to tell the message of Christ to others,  some ignore it, some walk away from it, some attend to other business, some get angry with the messenger and some today even lay hold of the messenger, mistreat them and sometimes even kill the messenger.

For example, Polk County, sits about 30 miles east of Tampa in Florida. Several highways travel through to make their way between major cities in the state. Last year, area religious leaders formed a group, “Polk Under Prayer” (or “PUP”) decided to bless the Pasco-Polk county line along Highway 98. PUP’s director said the act was done so that “God would protect us from evildoers, mainly the

drug crowd, that they would be dissuaded to come in to the county. A few weeks later, a coalition of atheists spent the day scrubbing awa at the highway with an industrial-sized tank of “unholy water.” They declared:

“We come in peace. This event is not about atheist rights, it’s about welcoming everyone into Polk County The holy oils and praying are just meant to make un-believers feel unwelcome. It sends a very bad signal to everyone in Polk County, and (anyone) who travels through Polk county who doesn’t happen to be Christian.”

The entire incident garnered quite a bit of attention as was reported in the Miami New Times as well as on the religious website, BeliefNet.

What if you had encountered these atheists on the street. What would you say to them? What tone or approach or words could you use to even begin the conversation? One approach has been used by Paulist Father Jack Collins, CSP. “Fr. Jack” is a native of northern Manhattan in New York City and the son of Irish immigrants. As “a lad,” He attended Good Shepherd Grade school run by the Paulist Fathers and later attend the Paulist high school in Baltimore, MD.  After high school he entered the Paulist seminary, also located in Baltimore, and was eventually ordained to – which religious order? The Paulists of course.

Why is that important ?

Paulists are specialists in communicating the faith through all sorts of media. Thus Fr. Jack Collins can be found on the Catholic website, Busted Halo featured in his YouTube video series, “You Don’t Know Jack!” He goes out on the streets, interviews people and asks them questions about the Catholic faith.  He is funny yet serious. He is friendly, non-threatening yet sincere about his faith and concise and clear about the answers he provides.

How about another approach? Dr. Tom Neal serves as Academic Dean and Professor of Spiritual Theology at Notre Dame Seminary in New Orleans. He writes about a time, in McDonalds when, on the TV, he heard an interview with a “so-called” Christian rapper:

If I come into a studio to record and sing a song about life on the streets of Chicago — and that means tellin’ my stories about broken relationships or poverty or despair or about just tryin’ to make a livin’ — and then in the middle of my song happen mention Jesus, they’re gonna to say to me: ‘Yo man, what’s up? You a Gospel singer?’ What that basically means is, ‘You ain’t a serious rapper cuz if you Christian you have to be all nice and sweet and syrupy about everything. They right away think you ain’t gonna be real and down low with the rest of us. Pie in the sky kinda deal. If you religious, they say, you can’t tell it like it is.’

But that’s not true, man, you know what I mean? Just cuz God comes into the picture doesn’t mean now you unreal, can’t face the dirt on the streets. I can say I’m a Christian man who raps, but I can’t say I’m a Christian rapper. Then it’s all over for my career. I’ll get pigeonholed.

See, religion’s been put inside this box and you’re either in or out. You can’t be both. You got Christian music and you got secular music. Oil and water.

But I don’t like the box, so I just ignore it and sing about life. And God’s just, like, already out there in real life, so I ain’t tryin’ to drag people where they ain’t already livin’. I’m just showin’ what I can see. It’s the same world they see, except faith lets me see God’s right there in the middle of everything. And I want to show it’s a much better world when He’s around, you know?

What are you going to do when “God sets up the meeting?” Whatchya gonna say when someone asks you about Jesus and rap music? Confession and Las Vegas? Your faith, your church, your sins? Are we at a place where we say, “Talking about God just isn’t my thing. And if I have to be talking about God, what comes next?” What else will God want me to do that I don’t like or I’m uncomfortable with?”  Well, what is your thing? What are you comfortable talking about? Start there. Consider what Pope Benedict XVI wrote:

If we let Christ enter fully into our lives, if we open ourselves totally to him, are we not afraid that He might take something away from us? Are we not perhaps afraid to give up something significant, something unique, something that makes life so beautiful … and ending up diminished and deprived of our freedom?

No! If we let Christ into our lives, we lose nothing, nothing, absolutely nothing of what makes life free, beautiful and great. In this friendship – the doors of life are opened wide.

In 1 Peter 3:15, St. Paul writes this: “Always be prepared to give an answer to everyone who asks you to give the reason for the hope that you have. But do this with gentleness and respect.”

Ok, here’s your homework. Prepare some concrete thoughts for #1 and #2 below. If you get to #3, the Holy Spirit will take it from there:

From: Personal Ministry Updates
← Are you Focused on “Fruit” or “Structures?” Homily 27th Sunday in Ordinary Time
Moral Happiness in Class Part 1 of 2 – A Spiritual Reflection →
No comments yet