Homily for the Transfiguration 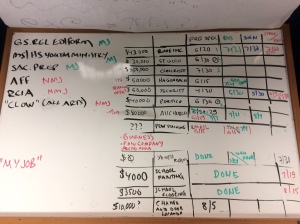 The picture above shows a little bit of what I’ve been doing “over my summer vacation.” This is a list of the numerous projects that have on the board. Some projects have already been erased since they have already been completed since the beginning of the summer. Hence, the project list was actually longer a few months ago.

When talking about managing such a list, I like to make the distinction between those things that I need “to touch” and those that need “to hold.”  For example, the various details surrounding our liturgy (altar servers, Eucharistic Ministers, music, hospitality…) are things that I “touch.” The homily, on the other hand, is something that I “hold” – for which I am directly responsible. Thus, I don’t directly have direct responsibility for all of the projects listed above. This has (thankfully) been the focus of our staff, a number of invested parishioners and the dedicated members of the Facilities Committee. 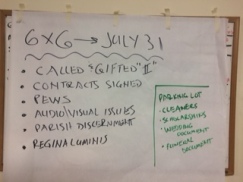 Then here’s my prayer list. These are the items about which I am intentionally praying by name during this month.

While discussing this with some priest friends, all who have similar lists, one guy asked, “How does this make  you a better priest?” Silence followed after which he asked, “How is it making you a better man?” If it’s not transforming you in some way into a better man and priest, it’s just busy work. So why are you doing it?”

Msgr. Charles Pope is currently a dean and pastor in the Archdiocese of Washington, DC, He publishes a daily blog at the Archdiocese of Washington website, Community in Mission, writes in pastoral journals, conducts retreats and a weekly Bible studies in the U.S. Congress and the White House. In a recent post, he commented on three adages. The first is, “The perfect is the enemy of the good.” But you’ll also hear its converse: “The good is the enemy of the best.” Finally there is this one, “Unrealistic expectations are premeditated resentments.”

I think this is one of the problems with marriage today. Many still have very high ideals expectations of marriage: that it will always be romantic, joyful, and fulfilling, that love will magically solve every problem.

Indeed, there is yet another related saying about marriage: “Many people want their marriage to be ideal, and if there is any ordeal, they want a new deal.”

Husbands and dads have their to-do charts. Wives and mothers have their 6 x 6 (In the case of moms, its 6,000 things to be done in the next 6 hours!)  Both have prayer intentions that weigh on their heart. But how is this making you a better dad? How is it making you a better woman?” If it’s not transforming you in some way into a better man/woman, dad/mom, it’s just busy work. So why are you doing it?”

Speaking of transfiguration and transformation, I read the story about another mother, father and two children – a 9-year-old boy, and an 8-year-old girl. They live in Syria. IN the past few years, their father was taken prisoner by ISIS several times. Their city was under siege.  Government solders and Islamic fundamentalist groups were fighting in the streets. Missiles “fell on the ground like rain.” Before the kids learned what school even was, before they ever swam in a pool or played hoops, they had already witnessed severed heads placed on poles and left in a public square – to serve as a warning. 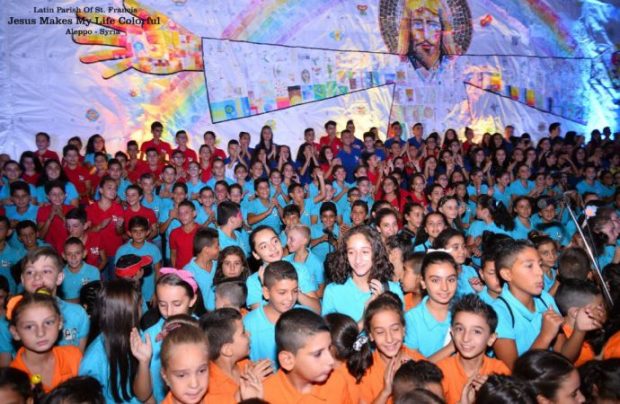 “Summer Oratory” is a program run by the Latin Rite Parish of St. Francis in their city of Aleppo. The theme of the oratory was “I will color my life with Jesus.” Sixty volunteers, including catechists and professionals, organized 860 children in activities such as theater, drawing, religion lessons, music, singing, stage, basketball, swimming, dance and handicraft. On Sundays, the morning Mass for children became a “thanksgiving to the Lord for all the good and bounty received during the week, and a moment to put into His hands, the oncoming week,”

When asked, the local bishop and pastor said that the program was devised to achieve a “transformation” and “transfiguration” in those children – sowing the seeds of hope. The focus is entirely on Jesus. The men said that material needs are substantial but God’s providence, working through governments and churches and the UN and NGOs will have to address that. They’re focusing on the Holy Spirit in the lives of the children – or the long term hope for Aleppo fails.

Blessed is the man who trusts in the Lord, whose hope is the Lord. He is like a tree planted beside the waters that stretches out its roots to the stream: It fears not the heat when it comes, its leaves stay green; In the year of drought it shows no distress, but still bears fruit.

God cares for all the needs of those who follow him. Lord, God of hosts, happy is the man who trusts in you.

So why the Transfiguration as we read in today’s Gospel? 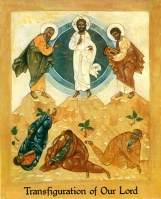 Maybe Christ allows himself to be transfigured so that his followers will understand even before the grieving events of  the crucifixion that suffering is not the end of the story, not for Christ and not for his followers either.

Her colleague, Jesuit Father John Foley, S.J. adds, “‘Yes, I am God, the Ancient One,’ God seemed to say in the First Reading, ‘the one that all heaven adores.’ But I am also that same loving God transformed into the roughness of your daily life.

… but only if you invite him in.

Ron Forseth is Editor-at-Large for SermonCentral.com, ChurchLeaders.com, and FaithIt.com, organizations dedicated to inviting and connecting people to a Bible- 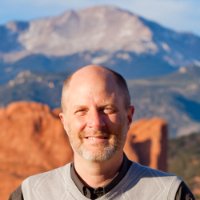 believing church to have a personal encounter with Jesus Christ. He served for several years as a college pastor in Colorado and in China and Mongolia. Ron lives with his wife, Carol, in Colorado Springs, Colorado. In a recent blog post he writes that,

There is most certainly grace to be had. It’s what the Gospel is all about. But only if we take our scrambled lives to God who understands and has mercy. (Hebrews 4:16) This is what redemption is all about.

In light of the messy lives of the Bible, Pastor Ron leaves us with three questions:

From: Personal Ministry Updates
← Homily for the 17th Sunday in Ordinary Time
Decisions, Direction and the “Disciple Maker Index” – PART 2 →
No comments yet