Puppies, Kittens and Circles of Sin – A Spiritual Reflection 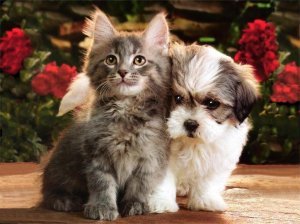 Well, here we are in the Third Week of Lent – prayer, fasting and almsgiving. Over the past few weeks I have written on how people in and around St. Monica have taken that admonition seriously within the context of their own “charisms.” They have assisted special needs children in the various All Abilities program. They joined Catholic Relief Services/Helping Hands in packing over 51,100 meals for the African country of Burkina Faso. They have attended daily Mass or spent quiet time in front of the Blessed Sacrament. All good – all admirable.

However, these practices are not about “being good.” Jesus didn’t come to earth to make bad people good. He came to make dead people live. Thus at the heart of these Lenten practices is the acknowledgement of our need for redemption and someone who saves us from our sins and their effects.

Father Dwight Longenecker is a former American Anglican priest who spent most of his life living and working in England. He was brought up in an Evangelical home in Pennsylvania and graduated from the fundamentalist Bob Jones University with a degree in Speech and English and later matriculated at Oxford.

Realizing that he and the Anglican Church were on divergent paths, Fr. Dwight and his family were received into the Catholic Church in 1995. In his blog, Standing On My Head, he has written a series of timely articles about sin and sinfulness that probably need to be considered to help us consider the true meaning of Lent – and Easter.

In his article, Puppies, Kittens and Circles of Sin, Fr. Longenecker’s expressed his thoughts based on his experiences in the Sacrament of Confession – thoughts which I share. It occurred to him that one of the reasons so few Catholics go to confession is that they don’t really think they have done anything wrong and, hence, when they do come to Confession, many make a very poor confession. The first thing they say is, “I’m basically a good person. I haven’t really done anything bad – I haven’t, like, killed anyone or anything” (Priest: “Oh that’s nice. Were you actually planning on that anytime soon?”). Or you hear, “I’m not really sure why I’ve come to Confession because I don’t think I’ve done anything wrong, but I know I probably should come to Confession….”  (Priest: “Really? If you haven’t done anything wrong, why are you here? I tell you what. Why don’t you put on the stole and hear my Confession because I do things wrong all the time!”). Or they make a confession which consists of telling the priest that they “feel bad” about what other people are doing wrong. “I’m sorry that my boss at work was nasty” or I had an unkind thought about my husband/wife and I know that’s not very nice…” You get the idea. 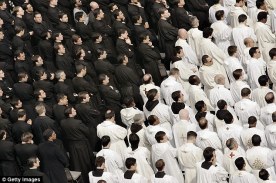 Now, we’re not blaming the faithful at all. A big part of the problem needs to be squarely laid at the feet of the priests. The faithful have been cheated out of their faith. This is the result of sixty years of “Puppy Dogs and Kitten Confession.” Nobody was ever taught anything about sin and all the talk was about love, sunshine and being God’s children. This was exacerbated by pop psychology which said everybody was OK and if you were unhappy it was your mother’s fault or your father’s fault or because the Fifth Grade nun yelled at you or because somebody at summer camp stepped on your S’more.

Weak minded clergy have swallowed the idea that they shouldn’t talk about sin because that makes people feel guilty and bad and that’s not nice. Or people might take offense, leave the parish, pull their kids out of your school/religious education, collections could go down, etc… But this is like a doctor, who knows you have cancer, saying, “I don’t really like to mention the “C” word because that might make you feel uncomfortable.”

Consequently, many of the faithful are “honestly” ignorant not only about sin, but also about personal responsibility and the consequences of choice. Too many really haven’t got a clue what sin is – and why it matters. If there is no sin, then there is no real choice for good or evil. The result is

a sappy, watered down, ineffective – and spiritually dangerous – religion.

It is important to stress that this is NOT to make people feel bad and guilty and try to scare them into heaven. Instead this is an attempt to sharpen our consciences so that we might engage our will and make the right choices. It is only as we engage our conscience and will and say “Yes” to God that we can make real spiritual progress.

Next week we will take this idea a bit deeper and seen how such a disordered conscience can even lead to poorly directed public policies.

From: Personal Ministry Updates
← The 2nd Sunday of Lent- The Homily
Faith, Love and God Only Come Through An “Encounter.” Homily 3rd Sunday of Lent →
No comments yet