The Third Sunday in Ordinary Time – The Homily

Isaiah 8:3 – For the yoke that burdened them, the pole on their shoulder, and the rod of their taskmaster, you have smashed.

Pelagius (360-418 AD) was a British-born ascetic moralist, who became well known throughout the Roman Empire in Late Antiquity. He was highly critical of the religious practices of many Christians he saw. Pelagius saw Christians using the idea of Original Sin and human frailty as an excuse for their failure to live a rigorous, holy, Christian life. He asserted, on the other hand, a strong version of the doctrine of free will which became an OVER-emphasis of the human dimension of Christ. Thus he rejected the Augustinian concept of the need of God’s grace and taught that moral perfection was attainable in this life through human free will without the assistance of divine grace.

How does Pelagianism look today? People still try and “sweat their way into heaven” If I just pray more. If I just fast more. If I get up earlier to talk to God. If I read the latest spiritual books. If I give more money. If I serve the more more.

Where does this come from?

Part of it is US Catholic culture driven by shame and guilt. This becomes: “The yoke that burdens, the pole on your shoulder, the rod of the taskmaster.” 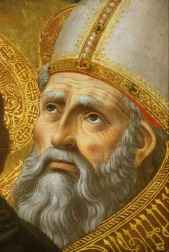 This is a warped view of St. Augustine’s statement, God created us without us: but he did not will to save us without us. (See also Catechism of the Catholic Church, no. 1847).

So what is the foundation of the right balance?

So how do you know when you get it right? How do you know that you’ve struck the right balance between doing your part and God doing His?

The work seems easier or, if it’s hard, it doesn’t seem fruitless and is done without the physical stress. Miracles and coincidences begin to happen. At the end of the day, you go to sleep with a sense of peace read about in the Bible,  “Therefore do not worry about tomorrow, for tomorrow will worry about itself. Each day has enough trouble of its own.” (Matthew 6:34)

Lord, may you support us all the day long,

until the shades lengthen,

and the evening comes,

and the busy world is hushed,

and the fever of life is over,

and our work is done.

Then in your mercy may you give us a safe lodging,

and a holy rest,

and peace at the last.

From: Personal Ministry Updates
← “Ingredients of an Amazing Homily” A Spiritual Reflection, Part 2
The Hermitages – Part 1 of 3: Pacem in Terris →
No comments yet