Last week I began to address some aspect of the Mass about which people have recently asked questions. I began with the topic of silence in the liturgy and wrote about the context of silence within worship. This week, let’s look at the nuts and bolts aspects of silence within the Mass.

A Catholic News Agency article mentions that “We are invited to silence several times during the Mass.  We are first of all called to be silent before Mass begins.  We come from a busy and noisy world. Thus we need that space of time to recollect ourselves in order to enter into prayer.  During the Penitential Rite at the beginning of Mass (before the “Lord have mercy – Christ have mercy…”) we are called to silence as we recall and repent of our sins.  We are called to silent reflection after each Scriptural reading as well as after the homily.  We are all called to silence after we have received Holy Communion (More on this later).  And we are invited, at the conclusion of Mass, to a silent prayer of Thanksgiving before departing for the parking lot.

These periods of silence are intended to bring “reality into focus.”  At Mass we express to God our contrition, we hear his word, and we receive his physical presence sacramentally.  These realities go beyond normal, day-to-day comprehension.  To hear and understand the Word of God is an expression of his great love for us.  To receive the body of Christ is the deepest kind of intimate communion with God.  The silence in the liturgy punctuates a rich and profound time of prayer with opportunities to reflect on the reality of our experience.   The silence of the liturgy is a gift which helps us to understand these great gifts we can receive.

In 2000, Pope Benedict XVI, then Cardinal Ratzinger, offered an insight into the silence of the liturgy. “We respond, by singing and praying to the God who addresses us, but the greater mystery, surpassing all words, summons us to silence. It must, of course, be a silence with content, not just the absence of speech and action. We should expect the liturgy to give us a positive stillness that will restore us.” He meant that our silence in prayer is not to be an emptying meditation alone. Instead, silence in prayer is an occasion to more deeply understand the Mass itself.

Here’s an example from St. Monica Parish. Several people have commented on the change of procedure of the Extraordinary Ministers of Holy Communion (EMHC) and the purifying of the sacred vessels (the “ciboria” which hold the hosts and the chalices holding the Precious Blood) after Holy Communion. People have asked why we “have to wait so long” until the EMHCs are finished. “Why can’t they just take the stuff to the sacristy and purify there like before and we can get on with the Mass?” (Yes, that is a direct quote from a parishioner).  The “silent” complaining (coughing, shuffling, audible sighs… Don’t think we don’t notice) has made the EMHCs very uncomfortable and they have comme 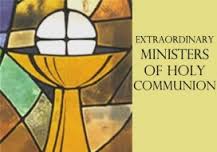 nted that they feel rushed. My directive to them: “The people of St. Monica need the silence. You take as much time as you want. The Church recommends quiet time after the reception of Holy Communion. What you do provides for this moment. You are handling the Sacred Body and Blood, Soul and divinity of Jesus Christ. It’s a sacred action and part of the liturgy. Also, you take as much time as you need.  You are purifying sacred vessels. Do it well. Do it right. It is meant to send a silent signal to the congregation. The action you perform is ‘holy” (from the Greek work “hagia” meaning “something uniquely distinctive – something set apart.”) You are not just “doing the dishes.” What you do, and the time you are taking to do it, silently conveys its importance to the congregation.” 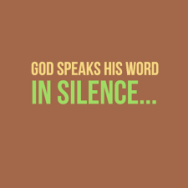 In addition, having just receive Jesus Christ in the Eucharist. As I wrote last week, “Silence amplifies the magnitude of what we are watching and the reality of what we experience.” It isn’t just “blessed bread.” It’s God you just received.  What is so important that you feel the need to rush out and can’t spend – what – two? Three extra minutes with the God who loves you and gave you the healthy legs with which you can walk out? God really enjoys spending time speaking with you. God likes that. As Pope Francis once said in speaking to children, “When   something good or bad happens, you want to tell your friend. Sometimes friends want us to listen. This is what makes a good friendship – spending time together, talking and listening.  The way we make our friendship with God grow is by praying. Prayer is like “speaking with a friend: in prayer one opens one’s heart.” Silence is necessary for the listening of the voice of God.