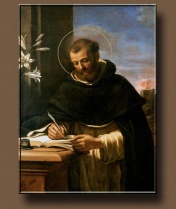 August 8 was the feast of St. Dominic. Dominic founded the “Order of Preachers”  which, along with the Franciscans, are known as “mendicants” from the Latin, mendicans, meaning “to beg.” This style of life offered the Franciscans and Dominicans deep spiritual and human insights which they put into practice as a pastoral strategy directed towards social changes in their time. Their spiritual/human strategy finds resonance even today as seen by the attractive message of a simpler lifestyle preached by Pope Francis.

The website, ePriest, recently considered St. Dominic’s spirituality and lifestyle in light of Jesus’ approach towards paying taxes. The article begins with Matthew 17:24-27: 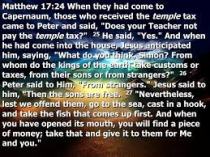 When they came to Capernaum, the collectors of the temple tax approached Peter and said, “Doesn’t your teacher pay the temple tax?” “Yes,” he said. When he came into the house, before he had time to speak, Jesus asked him, “What is your opinion, Simon? From whom do the kings of the earth take tolls or census tax? From their subjects or from foreigners?” When he said, “From foreigners,” Jesus said to him, “Then the subjects are exempt. But that we may not offend them, go to the sea, drop in a hook, and take the first fish that comes up. Open its mouth and you will find a coin worth twice the temple tax. Give that to them for me and for you.

Ok, what’s happening here? There were “No Tax Loopholes, Not Even for Jesus.” Reverend Joseph Benson was an early English Methodist minister and one of the leaders of the movement during the time of Methodism’s founder John Wesley. According to his “Commentaries,” the sense of Jesus’ thought was that “This tribute is paid for the use of the house of God. But I am the Son of God. Therefore, I am free from any obligation of paying this to my own Father.” ePriest continues that “Jesus drew from Peter the admission that collectors of the Temple Tax did not consider him the Son of God. They therefore thought he was subject to the tax. The scene harkens back to the line from the opening of John’s Gospel, “He was in the world and the world came to be through him, but the world did not know him. He came to what was his own, but his own people did not accept him” (John 1:10-11).

The Temple Tax was a payment that went towards the upkeep of the Jewish Temple, as reported in the Mishna, and based on an interpretation of Exodus 30:13 (“Each one who crosses over to those already counted is to give a half shekel, according to the sanctuary shekel. This half shekel is an offering to the LORD.”

The payment of the tax was not charity; it was not giving.

It was a form of justice, something that was owed to God for the upkeep of “his house.”  This is similar to what one contributes to the Church. All Christians have the responsibility to live simply, free up resources to give to others and to provide out of the surplus that God has provided for us. This is distinguished from two “charisms” related to finances and giving: the “Charism of Voluntary Poverty” and the “Charism of Giving.”

Someone with the Charism of Voluntary Poverty becomes a channel of God’s loving presence in the world by living a life of cheerful, voluntary simplicity (or “poverty”) in order to identify with Jesus and the poor. St. Dominic and St. Francis were models from former times.

We’re not talking about becoming destitute or living in squalor here. Nor is this a grim rejection of the goodness of the material world. Nevertheless, some feel called to a lifestyle, freely chosen, to identify with Christ as a doorway to a particularly effective service to the poor.

Someone with the Charism of Giving becomes a cheerful, joyful channel of God’s provision by giving with exceptional generosity to those in need. According to the Catechism, “giving is one of the most important witnesses of our love for others and is a work of justice that pleases God.”

Sherry Weddell (Catherine of Siena Institute) writes that to people with the Charism of Giving, providing to others is not a duty or responsibility – it’s their idea of a really good time! They are always asking “How much can I give away?” They have a remarkable, carefree confidence that God will provide all that they need to live so that they can focus on the needs of others around them.  What is remarkable is how much God provides them on a consistent basis. With an almost literal application of Luke 6:38, the more they give away, the more that the Lord keeps giving them to give to others, “good measure, pressed down, shaken together and running over” is poured into their lap. They truly live the life that “the measure you use, it will be measured to you.”

From: Personal Ministry Updates
← The 19th Sunday in Ordinary Time
St. Dominic and Welcoming Christ – A Spiritual Reflection →
No comments yet