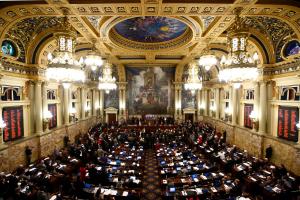 Last week I spoke to the Parish of St. Monica about a bill currently pending in our state senate, HB 1947 – Pennsylvania HB 1947 that poses serious dangers not only to the Archdiocese of Philadelphia but also to St. Monica Parish and other parishes throughout the archdiocese as well as Catholic ministries, charities and schools. HB 1947, and bills like it, is unjust and deeply misleading.

I urge you to write or telephone your local state senator and members of the PA Senate Judiciary Committee to vote against HB 1947.

All of us are rightly angered by the crime of sexual abuse. In this regard, over the past decade the Church has worked very hard to support survivors in their healing, to protect our children and to root this crime out of Church life. (See attached “Fact Sheet and Investments here outlining almost $1.9 million of archdiocesan investments in abuse prevention, victim assistance and support resources over the past several years).

HB 1947, and similar bills, are destructive legislation being advanced as a good solution. The problem with HB 1947 is its prejudicial content. It claims to covers both public and religious institutions — but in drastically different and unjust ways:

Meanwhile, private and religious entities face unlimited liability for exactly the same evil actions not just going forward, but also in the past.

Take a look here at the impact in the Diocese of Wilmington, and other states where similar “look back” legislation passed.  Individual Catholic parishes, like St. Monica, have been targeted and sued.  This resulted in parish and school closures and charity work being crippled. In targeting innocent parishioners and parishes, the legislation caused these parishes to bear financial burdens, along with the heavy penalties, of crimes committed by bad individuals in the past. Thus, the effect of bills like HB 1947 is to erase sacrifices of generations of faithful Catholics who have done nothing wrong. HB 1947 is simply bad legislation and a clear attack on the Church, her parishes, her ministries and her people.

The Church in Pennsylvania accepts its responsibility for the survivors of clergy sex abuse. It’s committed to helping them heal for however long that takes. Below I provide links to information and the impressive types of resources that the Archdiocese of Philadelphia have put in place to prevent, and address the needs of, victims of sexual abuse.

This is a serious and time-sensitive matter in that Senate hearings are scheduled to begin on or around June 13. Please act now to contact your senator, and members of the Senate Judiciary Committee, and urge them to oppose HB 1947 and any effort to impose civil statute retroactively.  You can do that quickly and easily by visiting the website for the Pennsylvania Catholic Conference [ www.pacatholic.org ] where you will see a prominent link on the homepage about this vital matter.

Thank you and God bless you and please continue to pray for me, St. Monica Parish and the future of the Catholic Church

From: Personal Ministry Updates
← The Feast of Corpus Christi – The Homily
Distractions in Prayer – A Spiritual Reflection →
No comments yet