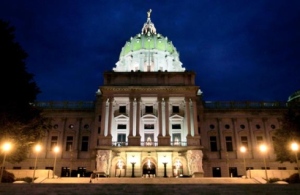 I wish to discuss with you, a bill that is currently working its way through the Harrisburg legislature that potentially could have a significant – and devastating – impact on the Archdiocese of Philadelphia and on the Parish of St. Monica.

Let me clearly state that the protection of our children is of the highest priority – and child abuse has no place, in our places of worship, in our schools, in sports programs or in families.  Prevention and accountability is now part of our Catholic Culture. Our zero-tolerance policy guides our response to any allegations and any allegations are immediately referred to law enforcement.

The church is not against prosecuting criminal sex abuse against children. Anyone who abuses a child, priest or parent, coach or consecrated religious sister, should be arrested, tried and, if found guilty, sentenced for that crime.

Despite these efforts, last month, the Pennsylvania House of Representatives passed Pennsylvania HB 1947 by a significant margin. The results of a recent Grand Jury, which revealed cases of child abuse in the Diocese of Altoona-Johnstown, was a major factor in moving this legislation through the House.

Over the next few weeks I will provide more details about this bill and the potential impact it would have on the Catholic Church and on St. Monica.  For now let me offer a few points:

This legislature is part of a long-term national strategy to go after the financial assets of the Catholic Church. Law firms have placed states, like Pennsylvania, on a scale – rating which states are “Best for Survivors” and which are “Worst for Survivors” (See link here and screen shot below). PA ranks 4th out of 6 categories. What is behind this legislation is the goal to move Pennsylvania, and other states, into categories where the legal environment is more conducive to significant lawsuits against the church.

This Bill is patently unfair.  The statue of limitations (SOL) for civil actions arising from childhood sexual abuse would be extended from the victim’s age 30 to victim’s age 50. However, the expansion of the statue of limitations for civil claims would have no practical impact on public entities (such as Catholic children attending public schools), since these entities will continue to benefit from “sovereign immunity/governmental immunity.” Why is this important? Because the overwhelming majority of Catholic school children attend public schools and any “Catholic” students abused while attending public schools would not receive the same legal coverage under this bill as students in Catholic schools.

This bill could have a devastating impact on the archdiocese and even St. Monica.  Look Back” legislation like this was passed in Delaware. Recall the statistic I stated above, where relatively few (1.6%) of child abuse cases in one city in one year actually involved the Catholic Church? Nevertheless, in Delaware, once the “Look Back Legislation was passed,” 183 cases were actually filed in Delaware and 151 (or 83%) were specifically brought against the Catholic Church. (Diocese of Wilmington – Impact of 2007 “Lookback” Legislation about the impact of this “Look Back Legislation in Delaware). The results:

Misconception #1: Statues of Limitations are a bad thing. Details fade and memories from 30, 40, 50 years ago cannot be considered reliable. The idea of “Repressed Memory” has been been debunked by the medical community and rejected by the courts. Nevertheless this idea continues to be seen, and proposed as valid, in litigation discussions as well as in the media.

Misconception #2: “The Church is fighting this from preventing victims from their day in court.” No we’re not. The Church supports prosecuting criminal sex abuse against children. But we support law that brings ALL child abusers to court. ALL children who have been abused have the right to have their day in that court, not just a specifically selected group (students in Catholic schools) while an entire – and significant – other group of child abuse victims (Catholic children attending public schools) never receive justice.

Misconception #3: “This bill is about fairness.” No, it’s not. There is an idea that this bill is being proposed to support all victims equally.  Catholic children in public schools and public institutions do not benefit from this bill in the same way, in fact they are hindered from bringing cases to justice.

Misconception #4: “The Roman Catholic Church is sitting on significant assets and therefore has substantial financial reserves to give to victims of child abuse. And since the money is there, we can and we should take it from them.” Many of our assets are buildings, grounds, pension funds, etc… The Catholic Church is not sitting on a large “pile of cash” that can easily be liquidated.

Misconception #5: “The Catholic Church is not assisting victims.” That is false. For example, last year alone, the Archdiocese of Philadelphia spent $1.7 million on victim support.

Misconception #6: Cases of sexual abuse within the Catholic Church continue to be featured in the media. The misconception is that these cases are recent and current and that significant sexual abuse continues today. This is not true. The majority of the cases being discussed in the paper are former cases from years ago.

From: Personal Ministry Updates
← Prayer and Our Deepest Desires, A Spiritual Reflection (Part 1)
Trinity Sunday – The Homily →
No comments yet