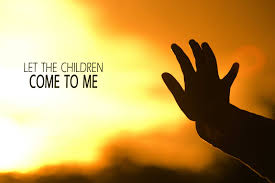 Awhile ago, I referenced an article concerning children and church.  Depending on the particular parish, the parents, the age and behavior of the children as well as the attitude of the priests and pastor, this can be an issue of some controversy.  When it comes to St. Monica, the feedback that I received (from both within and outside of the parish) was quite positive.  Let me share an email that I received from one mother:

I really appreciated the article that you posted entitled, “God put the wiggle in children.” As a parent of a 7 year old and 4 year old it is refreshing to see the children welcomed into the church with the expectation they will “wiggle” and it is ok.

When my first child was 2 and 3, I did not go to church with her at all. My thought was that I could not bring her because she would act up and everyone around me would get mad or I would spend all of Mass in the narthex.

At the time, I was doing some project work for the Mother-house of the Sisters of St. Joseph.

After speaking with a few Sisters I worked with at the time, they told me that it is ok and that God welcomes children, wiggles or no wiggles. So I began taking my daughter to Mass and, after some time, she actually began to understand the order of Mass and pick up on the songs. Now 4 years later she understands good behavior in church (most of the time) and participates and looks forward to the songs. I even get comments from some of the elderly parishioners how well behaved she is.

Now it is my son’s turn to pick up on these good behaviors in Mass. I no longer feel afraid to bring him into church. I just have to work through this with him the same way I did with my daughter. The more they are exposed to it, the better behaved they seem to become because it is a weekly expectation for an hour.

I though your blog post was very welcoming to anyone who had maybe stepped away from weekly Mass thinking “I have kids now I can’t go to church.” Bring them. God welcomes everyone into His house.

I know that not everyone would agree with Michelle. I have been in liturgical services where children have been absolutely unruly. Fortunately I have not seen that as the case here at St. Monica. For the most part, when young children have begun to become restless, I see parents unobtrusively pick up the child and take them outside for a little bit. Sometimes they settle down. Sometimes they don’t. For you parents who have rather “active” young ones, realize that, for a while (even a few years perhaps), you might not be able to enjoy Mass as you would like to.

At St.Monica I recently had a conversation with a mother who now has college and high-school aged children. She remembers times when she was younger that she just ached for some quiet time and some peace during Mass when she could get spiritually fed – at a time , she said, that she needed it the most. She mentioned that it didn’t have to be every week but if she could get someone to watch her kids for just one week each month, that would have been enough. Well, together with several mothers, that mom has begun to organize a “baby sitting service” for other moms (and dads of course). Details can be found elsewhere in this week’s parish bulletin and will remain in the bulletin for several weeks.

Besides taking advantage of the service, if you – or someone else you know – would like to help in providing this ministry to others, see the post in the bulletin and call them. It would be greatly appreciated.