The 4th Sunday In Lent – Homily

There are situations that arise in our lives that can challenge us. They could involve finances, family, friendship, health, happiness or helping others. During these times, we are called upon to try and make some sense of the situation, do an analysis to aid in discernment, come to a decision and act upon our convictions.

It has been said that, “Grace builds on nature.” Thus, during that analysis and discernment phase, it makes sense to use our “natural,” human gifts, our education and our experience in the process as well as to combine this with the “natural” talents, experience, education and advice of others.

What we, as believers, are called upon, is to also examine the situation with the eyes of Faith.

And therein lies the rub of today’s Gospel.

I was listening to a guy telling the story on how he was once a soldier stationed in the Middle East. He later returned, got married, had children, found a good job, home mortgage, etc…

But there was a lot wrong with his life. For years he had problems with his marriage, his children, his job …. as well as with addictions.

He finally decided to do something about all of it. He sought medical help and was eventually diagnosed with clinical depression/PTSD.  This was a freeing revelation since he finally realized that there were other factors that were playing a role in his life. What was important was to see that these were “factors,” not “excuses.”

In addition, he began talking with other soldier comrades who, after the war, had experienced gradual or sudden physical blindness due to battle injuries.  He also talked to other soldier comrades who had suffered debilitating diseases, permanent injury or loss of limbs.  Through it all, he began to understand how these men – had to learn how to “see with new eyes” – to do things differently – in order to create a more abundant life.

He parlayed this into his own life and gradually began learning how to see, and do, things differently in his own life – realizing that he also had to begin seeing with eyes enlightened by His Faith. Only in this way could be begin to create a more abundant life, with (not relying on – not blaming) other people. (An aside: he mentioned that not addressing this is where a lot of addictions are based)

So what’s the message for us today? What might be missing in our case? Where do we not “see”? Let me offer four points.

1. Notice – the man in the Gospel was not immediately healed. Jesus applied an initial remedy then asked for additional steps to be undertaken. This took patience on the part of the blind man as well as a belief in the instructions provided by The Lord. 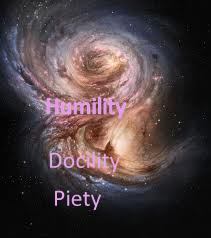 2. Sometimes we “throw out people” who are trying to help us.  Maybe divine providence has placed them at that time, at that place in our lives. Yet we dismiss them or perhaps push them away. Sometimes it’s not because they’re wrong, but because they’re right! We need the Lord to help us see the need for humility.

3. Sometimes we try to fix the problem, rather than listening to the person who is offering a solution. We need the Lord to help us see the need for docility.

4. Concerning the fourth point, let me say that I’m a bit of a country and western fan. There’s a song called “Baby Girl” sung by the group Sugarland with lead singer Jennifer Nettles. She sings:

Everybody’s your friend. Well you can never be sure.

But, girl, you just remember what your knees are for.

Why is it important? It is because sometimes the best response – is no response. The best response is simply stopping everything and getting on our knees. We need the Lord to help us see the need for piety.

Today is called “Laetare Sunday.” The word praise comes from, “Laetare Jerusalem” (“O be joyful, Jerusalem”) from the book of Isaiah 66:10. The day traditionally is a day of relaxation from normal Lenten rigors; a day of hope with Easter being at last within sight.

As a sign of this hope, rose colored vestments can be worn along with other liturgical decor. I suspect that you might have noticed it. Yesterday, one couple commented on the decor saying, “Well, it certainly is bright enough. If nothing else, a lot of people will comment and talk about color today.”

Well that’s good. At least that might lead to a catechetical conversation based on something that you and I can see. Maybe you take the color with you throughout the week. Let it’s vibrancy and brightness remind you of what Jesus said to the blind man: “What do you want me to do for you?” The blind man replied to him, “Master, I want to see.” (Mark 10:51 / Luke 18:41)

Jesus said “I came into this world for judgment, so that those who do not see might see. While I am in the world, I am the light of the world.” So come to Christ this week and allow Him to, perhaps, show you something new, bright and vibrant.

[Audio version of the homily can be found here]:

From: Reflections on Sunday Readings
← 5th Sunday in Lent – What perturbs God?
The 3rd Sunday of Lent – Homily →
No comments yet