The 6th Sunday in Ordinary Time – The Homily

Leprosy is at the heart of the Scripture readings this weekend. In “Chapter 2, Suffering,” of her book, Passion and Compassion in Early Christianity, Catholic University Professor Susan Wessel notes three interesting aspects of Jesus’ approach to the healing of the Leper. No mention of the sin (as a cause), no inquiry as to the circumstances leading to this (vs. Jewish law that even Jesus asks to be followed, and Jesus touches the leper and doesn’t become contaminated himself.

Gregory Nazianzen and St. Basil were two “Church Fathers” from the 4th Century. Basil was born of a Christian family at Caesarea in Cappadocia in 330 AD. Conspicuous for hislearning and virtue, for a time he led the life of a hermit but in 370

was made bishop of Caesarea. He fought against the Arians and wrote many admirable works, especially his monastic rule which many Eastern monks still follow. Saint Basil died on January 1, 379. Gregory Nazianzen (also called Nazianzus) has joined his friend Basil as a hermit and was later ordained priest and bishop. In the year 381 he was elected bishop of Constantinople; however, because of factions dividing the Church, he returned to Nazianzen where he died on January 25, 389 or 390.

It is interesting to note how these two churchmen approached the reality of suffering.  At some point during their lifetime, a severe drought and famine occurred. St. Basel came up with an idea to ask the wealthy and those with resources to open up their grain bins. There is evidence that Basil’s plan worked although the Church Father had to exercise some significant rhetorical skills to convince certain wealthy members of the community NOT to use the famine as an opportunity to drive up the price of food, but to examine the moral implications of their response to human misery (vs. hoarding and profiteering. To this point, Basel wrote, ”they should be condemned as murderers.”  (Passion and Compassion, Page 37)

As in the time of Jesus, Leprosy was also a dreaded disease during the time of St. Gregory and St. Basil. In Gregory’s book, On Love of the Poor, mentions a collection for a leprosarium that was being organized by Basel. Gregory writes, “Lepers – the pitiful spectacle of living corpses – no longer came to public meetings and gatherings, where they had been the object of ridicule and scorn.” Now, here’s the problem according to Gregory: “out of sight, out of mind.” When contemplating the ethical responsibilities implied in human suffering “What was needed, was training people on how to feel.” What a great line. 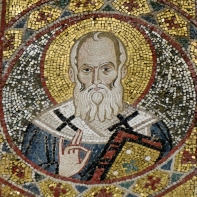 Professor Wessel writes specifically on lepers, leprosy and human suffering in her article, The Suffering of Christ, Humanity and the Lepers in Gregory Nazianzen:

Gregory Nazianzen spoke of a suffering Christ “who became weak for us” in the context of an oration, On Love of the Poor, which dealt at length with the extreme suffering the lepers had endured. The outcasts of the ancient world, lepers figuredprominently in Jesus’ ministry as recorded in the Gospels. By juxtaposing their human suffering with divine weakness, Gregory implied that Christ had suffered with the lepers. The comparison not only gave meaning to the human experience of suffering, it also explored the extent of Christ’s suffering in the divine economy. There was no affliction too grotesque for Christ to have assumed.

Christ then experienced the fullness of the human condition as the head of this body.

Does the flood of suffering that we see via media overwhelm us to the point where we simply freeze?” Is a possible solution to take a page from the Church Fathers and initially “bite off” a piece that we can manage? From there the Holy Spirit can expand hearts, logistics and organization of resources to expand the impact towards the larger Body of Christ.

What can we do during Lent to identify that one, small “bite” of human suffering and do something about it?

From: Reflections on Sunday Readings, St. Monica
← “Da Iggles” and the Bible – A Spiritual Reflection
Homily for Ash Wednesday →
No comments yet