Danya Ruttenberg is a wife, mother, author, speaker, former, hard-core atheist who is now a Conservative Jewish Rabbi. I’m currently reading her book. Surprised by God: How I Learned to Stop Worrying and Love Religion. The Rabbi writes about this time of year and her journey from atheism to becoming a committed Jew:

The media, around thi

s time, gets very interested in the phenomenon of “buffet-style” religion-picking and choosing aspects of different faiths and rituals as they resonate with individuals.

The way people celebrate the annual feasts of Passover and Easter, Christmas and Hannakah fit into this category.

Some writers and theologians and priests and parishioners weigh in on this issue, shrugging their shoulders and saying, “Hey, at least they’re here. Whatever gets people back to “The Source,” even occasionally, is cool.”

But the opinions that seemed to resonate with me were against this pastiche of practices divorced from context – choosing superficial breadth over committed depth.

For example, Eastern Orthodox author Frederica Mathewes-Green wrote in the Utne Reader, One of the best pieces of spiritual advice I ever received was … that I should give up the project of assembling my own private faith out of the spiritual and religious “greatest hits of the ages … We can only gain wisdom that transcends time by exiting our time and entering an ancient path, and accepting it on its terms (not ours).

Yoga and Judaism each seemed capable of taking me somewhere spiritually, but it was clear that I’d have to choose only one in order to do it properly. Judaism won because I was a Jew,

We only learn by submitting to something bigger than we are. The faith I was building out of my prejudices and preconceptions could never be bigger than I was. I was constructing a safe, tidy, unsurprising God who could never transform me.

I had to have more than that.

She is talking about the critical importance of wonder and enchantment. 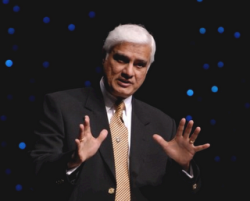 In his talk about “In Search of Meaning,” Apologist Ravi Zacharias (RZIM Ministries) relates the story of “The Boy – The Door – And The Dragon.”

If you tell a story to a one year old boy and say “Tommy went down the hall and saw a door – and the door was closed” the boy will be fascinated.” “Why daddy, was the door closed? What’s behind the door mommy.”

If you tell a story to a four year old boy and say “Tommy went down the hall and saw a closed door – and suddenly, the door opened!” the boy will be mesmerized.”

If you tell a story to a seven year old boy and say “Tommy went down the hall and saw a closed door – and suddenly, the door opened and on the other side of the door he saw – a dragon!” the boy will be excited.”

First, everything becomes merely about physical matter. You’re searching for the latest experience, the latest app, the latest toy. You’re dedicating your life to the search for wonder and enchantment but trying to achieve it through physical objects.  Your life never rises to the dignity and grandeur that it was meant to.

You were born to be so much more than merely physical matter.

Second, loss of wonder leads to a loss of gratitude. You become totally focused on physical gratification. For people who discount religion you have to explain not just millions but the hundreds of million for people especially in the Middle East and far east whose religions express an indebtedness and gratitude to a higher power. Why is that? Where does this  sense of gratitude come from?

There was an Air Canada flight that needed to make an emergency landing in Cincinnati because a fire had started on board. It did not go well. The plane hit the ground so hard that the landing gear snapped. Fl!es engulfed the aircraft as emergency shoots were deployed. Many died but others were saved. The last one to exit the plane was the captain. Ne was later seen sitting by himself weeping that he could not save everyone.

Gratitude – it’s the most natural and human thing in the world.

Few days later, an Eastern Airlines flight was on the way to the Caribbean. Both engines flamed out. The pilots tried every procedure to get them started; nothing worked. The Captain came on loudspeaker and said that they were going to crash and to prepare emergency procedures. Suddenly, and inexplicably in the midst of the crash procedures, both engines started again, with no explanation. Who are you going to thank then?

Around the world, millions of children will be thankful for someone who had mysteriously put candy and toys in their stockings. Who do you thank for giving you feet and legs to put into yours?

Ravi muses that currently in America, we are dangerously close to a period where we think that by our wealth and by our power and by intellect and by our autonomy and by our technology we don’t owe gratitude to anyone. If that is the case, contemporary America would be the first civilization in 21 centuries who would dare to build their society on that kind of an experiment.

And in this regard, just like the baby Jesus, God is indistinguishable from those who are around you – and from that which is all around you. But it is precisely in the midst of this – in the midst of the routine – that wonder and enchantment can occur. Can you explain what you find so fascinating about a wooden figurine lying in a feeding trough surrounded by a bunch of animals and farmers?

Speaking of enchantment in the midst of sloppiness….

Rabbi Danya Ruttenberg recently published another book oncthis and the title is quite telling: Nurture the Wow: Finding Spirituality in the Frustration, Boredom, Tears, Poop, Desperation – Wonder, and Radical Amazement of Parenting.

The third thing that happ

ens when wonder and enchantment is lost is that a sense of emptiness and lack of purpose fills the gap. The loneliest moment is life is when you strive to achieve what you think is the ultimate and, once having attained it, you realize that it has let you down and that it’s still not enough.

It is because you have a soul, and you soul is a hole looking for something to fulfill it. No human experience, no created object, can fill that. Only something eternal – something full of wonder and enchantment – can do that. And so this day, in the City of David, a child was born.

From: Reflections on Sunday Readings, St. Monica
← The 4th Sunday of Advent- The Homily
Prayer – Top 10 Reasons Not To (Part 3) →
No comments yet