The “rectory” was built in 1958 as a convent for the sisters who taught at our school. After the original rectory burned down, the convent was reconfigured as a rectory for the living quarters for the priests (2nd floor) as well as office space for the parish staff (1st floor). The basement was primarily used as storage space.

The basement was always damp so two years ago, we installed two dehumidifiers which kept the primary storage areas relatively dry. Nevertheless, recently, the parish staff felt that there still might be a mold issue. A testing service was hired and alerted the pastor and staff that the rectory, indeed, did have a very serious mold issue not only in the basement but also in the 1st floor working area as well.

A company was hired to perform the mold remediation. The project costs were close to $55,000 and were fully paid out of funding received from a generous estate bequest from former parishioner Bill Ward.

Initial testing immediately after the work showed acceptable levels of mold in all three floors of the rectory. Currently, plans are to allow the new system and dehumidifiers to work for about 30 days and then test again.

Phase 2 work will include:

Pictures of completed work below:

<— Concrete and drain work at bottom of basement stairwell.

Two views of vapor-barrier lining of walls and dirt floor in cubby-hole area of basement: 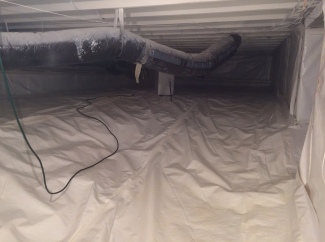 Yesterday evening I met with members of “Parish Leadership” (Parish Finance Council, Parish Pastoral Council, the Facilities Committee, Parish Staff and other select parishioners). We were joined by Catherine Cunning from the Cunneen Corporation who we retained to do our “feasibility study” and “capital campaign.”  Topics were:

I shall be providing additional information on the results of this meeting in the weeks ahead.

Proposals for installing new exterior doors in the church were received. Details included discussion on items such as:

In the end, the decision was made to go with Baut Studios, the manufacturer of our original church doors, which still has the etching originals.  New doors will be of a “reinforced” style that resists sagging even more.  Since replacing all 12 external church doors now would put us over the original budget figure for door replacement, we decided to only replace the 4 sets of side-doors, not the 4 doors at the entrance (which are in good, working order). This will ensure that all doors would be in good working order and appearance for the next 20+ years.

Estimates for the 4 interior wood doors were received. Work would include repairing damaged stain glass, installing new hardware and installing door-length hinges (to prevent future sagging of doors). It was recommended that Baut Studios would be employed for this work as well.

This is a project that has been “near and dear” to my heart for the past 2 years, especially considering that we have a number of fine parishioners who regularly use wheel-chairs. We received several proposals for automatic door openers. Considerations included:

ADE was recommended and chosen for this component of the door work They’ve worked with Baut Studios on many projects and are a local company as well.

Both boilers located in the “new school” shut off on Friday 12/18. Tozour-Trane (with whom we have an HVAC service contract) was called to examine the issue. The electronic on-switch for one of the boilers needed replacement. The switch on the other boiler seemed to work fine after removal and cleaning. The situation will be monitored over the weekend as the weather becomes colder.

Several months ago, we installed a new roof over the “Hagenbach  Room” section of the Parish Center. We did this before we ordered and replaced the numerous wet or water-damaged ceiling tiles. Recently we noticed some new leaking in this area. The roofer has been notified and will be visiting us next week (12/21-23).

From: Master Plan/Capital Campaign, St. Monica
← The 3rd Sunday in Advent – A Homily On “Joy”
Stages Of Spiritual Growth and Maturity – A Spiritual Reflection (Part 2) →
No comments yet