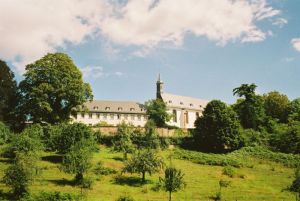 REFLECTIONS FROM THE MONASTERY

I recently was visiting friends in Germany and had the opportunity to stay at the Benedictine Neuburg Abbey in Ziegelhausen (near Heidelberg). While I was there, I had the opportunity for some quiet reflection on a number of topics which I shall roll out in the coming weeks. 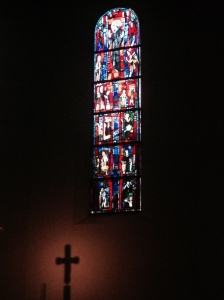 Behind the altar at Neuburg Abbey near Heidelberg, are 5 stained glass windows with the traditional, gothic form and colors. Not surprisingly, the center window depicted scenes from the life of Christ, on the immediate left were scenes from the life of the Blessed Virgin Mary, and immediately on the right were scenes from the life of “The Founding Father” Benedict. Along the sides of the chapel were windows with a more modern form. The border of each window was blue. The inner part of each of the widows had a different color; one was red, one yellow, one green, etc … In the middle of each window was a small, white square. The pattern, naturally, requires an interpretation.

The Abbey has existed since the 1500s. Apparently, stained glass containing a preponderance of the color blue had been part of the architecture of the abbey chapel for many years. Thus, the blue color around the edge of the windows represented the Benedictine tradition. The different colors in the middle of the windows represented the different monks, different talents, different eras that had been experienced within and around the monastery throughout the years. The white square in the center represented Christ who, throughout history, in the midst of the traditions and specifically in the individual lives of His people, “breaks through.” 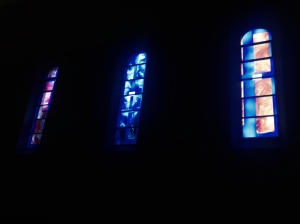 How has Christ “broken through” your life this week?

Did the “colors” of your life change because of this “break-in” of Christ?