FOUR CHAPTERS IN OF THE LIFE OF ST. MONICA

Many people are familiar with at least part of the story of St. Monica – mother with a wayward kid who patiently suffered and prayed for her son (St. Augustine) for years – how he eventually came away from his life of dissipation, embraced the Catholic faith, was baptized – later become the Bishop of the City of Hippo and wrote some of the most profound Catholic theology in history.

But the rest of the story might not be as neat and tidy as that.  So let’s look at four “Chapters” in St. Monica’s life and see what kind of spiritual gems we can glean from her.

I surmise that Monica might have been an alcoholic. Her son was known to “imbibe” to a significant degree. We know that alcoholism can run in families. And there is a story of a young Monica who, as a little girl, was responsible for going to the wine cellar and bringing up a few bottles of wine for the family. At some point the young girl sampled some of the beverage, which led her to sample ever more quantities. One day a slave caught and chastised her. Totally embarrassed, Monica swore off of wine and apparently never drank for the rest of her life.

Monica “recognized” that what she was doing was not helpful. At her young age she also was afraid that her parents might find out about her “habit” so healthy fear might have played a role as well. Nevertheless, Monica also opened up herself to the redemptive power of God, whose grace enabled her to ward off a potentially debilitating addiction during the rest of her life. 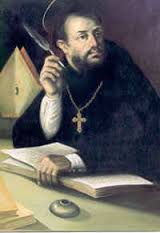 St. Monica strikes me as a bit of a “helicopter parent.” She had three children but Augustine was the most gifted – and the most recalcitrant. She chased after Augustine for most of her life trying to save him from his immoral lifestyle and hoping for some type of conversion to the faith (Sound familiar?).

At one point, Augustine became a well-known teacher and set off for Rome (with his young mistress and young illegitimate son, Adeodatus by the way). Monica went after him to try and prevent him from going, fearing that his lifestyle would only decline further in the “Eternal City.” Augustine pulled a fast one however. He told “mom” what time and on which ship he and the others were leaving. Convinced that she had some time, Monica went to chapel to pray.  But, while she was at prayer, young Augustine boarded a different ship leaving at an earlier time and made his way to Rome.

Eventually Monica was able to board another ship and locate Augustine in Rome. But, in the meantime,  is it not likely that her conversation to God might have sounded like, “I’m doing this for my son. I’m trying to bring him to a relationship to you. Only you can save him. Why aren’t you helping me!?”  Devotions do not guarantee an immediate answer from God. Sometimes our prayers are never answered. Is not Monica a patron of unanswered prayer? Did she not, at some point, have to “detach” herself from continually meddling in the life of her son and let God perform the task in “His” time?

CHAPTER 3 – FINDING MEANING IN MIDST OF MELANCHOLY – Detachment of Desires.

Once in Rome, Monica found out that her son was traveling even further north to the city of Milan. Two significant items mark her life once Monica arrived there. One was that she developed a very close friendship with

St. Ambrose, the Bishop of Milan (It was Ambrose who eventually helped turn young Augustine around and baptized him).  Ambrose became a spiritual mentor to Monica as well for several years while Augustine struggled with himself. In the meantime, Monica busied herself with other mothers and families, the poor and those who needed help. Obviously being a woman of some financial means she decided to “light a candle rather than curse the darkness” all the while continuing to seek spiritual comfort from Ambrose while praying for the conversion of her son.

CHAPTER 4 – MIRACLE IN MILAN – Confidence and Consolation in the Community

The sense that I get from reading Monica’s story is that her prayers certainly had an impact on the conversion of her son. St. Augustine himself writes about this in his spiritual classic, “Confessions.” But it was Ambrose and other members of the Church, who performed the slow, arduous, day-to-day, human tasks in working with Augustine, to have him recognize the tremendous talents that he had, to prove to him his obligation to place such formidable talents at the service of others, to prove to him that he would never be happy unless he did so and thus to eventually lead him away from an immoral lifestyle and towards a close relationship to Christ.

Monica, the “helicopter mom,” the stalker, the nag, could probably take great solace that Ambrose and the others might often have said, “Monica, back off. Relax. We love him too. We’ve got it covered.”

St. Monica’s story is admired, and rightly so. But Monica’s life was also messy. In this regard, she provides us with some comfort and spiritual guidance in four areas where many of us struggle as well …