The Education Competition isn’t in Bridgeport, it’s in Bombay 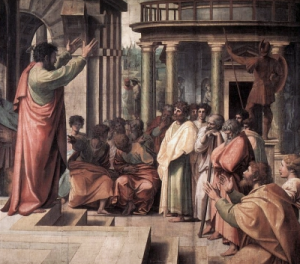 Ben Jackson is a writer and app developer living in Brooklyn, NY.  I noticed one of his article entitled, How Tech Will Transform the Traditional Classroom.

We are in the midst of restructuring the Catholic School System here in the Archdiocese of Philadelphia. In conversations I have had with teachers,  parents, principals and Bishops, they have expressed the need for these changes if Catholic education is to be viable in the future. I agree. However…

After the Chrism Mass on Thursday, I was enjoying lunch at Bomb-Bombs in South Philly. Over ribs, roast pork Italian and penne, a fascinating conversation ensued between a teacher, several school parents, a professional therapist who specializes in helping grade- and high school students, a counselor-in-training and me (who also taught high school for 7 years). It was proposed that current pedagogical approaches, what is being taught to students studying to be teachers at our universities and current school strategies might all be outdated.

I pointed to the example how “help desks” were pushed overseas especially to India after the “Millennium Bug” issue 10 years ago. The reason for this move was that numerous corporations and enterprises moved their data over there before the year 2000 ‘just in case.” Before they did however, massive amounts of infrastructure (satellite communications, cable links, computers, WANS, LANS, software, hardware) was installed within India and between the US and India. Why there? There was a large pool of highly educated people. They were technologically savvy. And the spoke ENGLISH!  After 2000, India had a glut of personnel and this massive technology infrastructure. What to do with it? They offered it to the US as a potential for additional, and extremely economical, customer service. Although American might complain about foreign “customer service,” the fact is that personnel costs “over there” are just too economical when compared to the costs of salary-and-benefits costs of hiring Americans “over here.” It’s simple economics. Do the math

Guess what?  They’re going to do it again. This time, the market will be our classrooms and our students. They still have a large pool of highly educated, highly motivated, English speaking people. They are taking “accent reduction” classes to learn to “speak just like Americans.” Maybe they don’t have degrees from Oxford or Cambridge (although some do!) many have been educated at fine universities all over the world. The competition for jobs there is fierce! Only the best survive.

Home-schooling is growing at a rapid rate, 15 – 20% in the year 2000. Some reports claim that the number of students being home-school educated is greater than those being educated in “charter schools” (and we know the impact that THEY have had on Catholic Education in Philadelphia, they’re draining our Catholic schools!). Home-school parents are well educated, incredibly passionate, committed, well organized and successful. They have also become a serious, political force in the US. I heard of one story (Sorry can’t site source or confirm it) where public school teachers approached one legislator about proposing new laws to counter home-schooling. The legislator basically said, “No way. Do you know how BIG this movement is? Do you have any idea how many voting parents are involved in this? There are WAY more of them than there are of you now. You’re a teacher…Do the math.'”

So take the University of Phoenix model. You’re a parent. You have several PCs, iMacs, iPads, iPhones, or Droids connected to a LAN in your home with a high-speed internet connection. Suppose a “University-of-Phoenix-like” grade-school or high-school in India (or England or Ireland or Canada or even in the US) offers you and your child a full curriculum, or even just a few courses to either take some pressure off of you or to enhance what you are already teaching your children. Then they set a competitive “price point” with discounts if you have 2, 3, 4 or more children. And the teachers excellent! Top-notch, highly educated, experts in their field with real-world experience. The school even brings in world renown, web-based “guest lecturers as part of the deal. You going to pay tuition to send your child to a near-by building?

For Catholic education, death knell or window or opportunity?  Any new Catherine McAuleys or Elizabeth Ann Setons out there?