What do Planet Fitness, Planet Hollywood and Christmas have to do with the Baptism of the Lord?

END_OF_DOCUMENT_TOKEN_TO_BE_REPLACED

The First Sunday of Advent – The Homily

When we look at the First Reading from Isaiah as well as the Gospel, what is the message? What is the issue here? What is the sin that is evoking the wrath of God?

Is it complacency – or is it possibly, instead, distraction?

How do we keep alert among the clutter?

How do we distinguish between legitimate “concerns” and unhealthy “anxiety?”

What are the Scriptural guidelines to being “watchful?”

Be intentional- do the next best thing. (Eph. 5:15-16 – “Be very careful, then, how you live, not as unwise but as wise, making the most of every opportunity, because we live in evil times.”)

Be thankful- for one thing each day. (James 1:17 “Every good and every perfect gift is from above, coming down from the Father of lights.” Philippians 4:6 “Do not be anxious about anything, but in everything by prayer and supplication with thanksgiving let your requests be made known to God.”)

Be realistic – Live the serenity prayer:

God grant me the serenity to accept the things I cannot change, courage to change the things I can; and wisdom to know the difference. Living one day at a time; Enjoying one moment at a time; Accepting hardships as the pathway to peace; Taking, as He did, this sinful world as it is, not as I would have it; Trusting that He will make all things right if I surrender to His Will; That I may be reasonably happy in this life … and supremely happy with Him forever in the next. Amen. (Reinhold Niebuhr)

From Mary the Mother of God: Be reflective

C. S. Lewis was born 115 years ago today. He was quoted in the Wall Street Journal: “If we find ourselves with a desire that nothing in this world can satisfy – the most probable explanation is that we were made for another world.”

Having examined the scriptural basis for what constitutes someone who is “watching,” can we look to someone who offers an example? Consider the story of Brother Andre Bessette the Saint from Montréal.  The Holy Cross Fathers vocation web site tells his story as folllows: 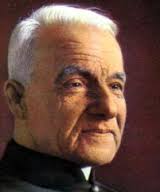 Born Alfred Bessette in Quebec in 1845, he was orphaned at 12. With little-to-no formal education, he became a Holy Cross brother and because of his sickly nature, was assigned as the “Porter” or doorkeeper at Notre Dame College in Montreal – a post he held for 40 years. It was in this role as a porter that St. André was also assigned to minister to the sick of the community.

He became known as the “Miracle Man of Montreal,” and was later assigned full-time as the caretaker of an “oratory” or small church that he prayed would be built to honor St. Joseph. By the 1920s, the Oratory hosted more than a million pilgrims annually, and hundreds of cures were attributed to his prayers every year.

Being a saint is not complicated; it’s actually rather simple.

This is what it means “watch.”

The past is in God’s mercy, to go there causes despair.

The future is in God’s Providence, to go there is playing God.

The present is God’s gift, to you, to be lived in his love.

Audio version of the homily can be found here:

Squanto, fish and our relationship with God.

END_OF_DOCUMENT_TOKEN_TO_BE_REPLACED

Priests need to become more informed about - and comfortable talking about - intimacy and human sexuality with married couples.

END_OF_DOCUMENT_TOKEN_TO_BE_REPLACED

The (crucial) precursor Step was the recognition that God loves us FIRST! The initial move is His.

END_OF_DOCUMENT_TOKEN_TO_BE_REPLACED

The 28th Sunday in Ordinary Time – The Homily

What's the difference between merely "showing up" and really "being there?"