Over the past weeks, I have been informing the Parish of St. Monica about a number of important decisions and provide a roadmap for the parish for the next several months. For the past 9 – 12 months, a group of parishioners have been meeting with me to read the “signs of the times,” take an honest look at where St. Monica is now, and discern where the Lord wishes to take the parish in the future. Over the next few weeks, I’d like to outline specifics about three areas where we will be especially focused for the next three years.

The first area of concentration will be to ENCOUNTER CHRIST THROUGH SCRIPTURE.  This “encounter” will initially focus on three groups: youth, women and men. Eventually we will also incorporate ways the Bible can minister to couples. When people engage the Bible, things happen. We have seen this in Walking With Purpose, which has been a tremendous blessing for the women of St. Monica and the wider Catholic Church. This week let me introduce a program that St. Monica will begin to emphasize for the men and for couples!

During the Great Jubilee Year of 2000, Steve Bollman experienced a personal call to found a ministry dedicated to the renewal of marriage and family life. In 2002, he set aside his professional interests as an energy derivatives trader in Houston, Texas to found Paradisus Dei, an organization of lay Catholics dedicated to discovering the superabundance of God within the home. Steve’s formidable business background allowed him to profoundly understand the essential role of the family in society and achieving a vision of “The Kingdom” in modern times. His professional experience allowed him to put together something that would present the tremendous mysteries of the Catholic church in an engaging a 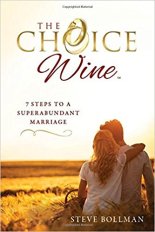 (As an aside, in 2016, Steve shared what he had learned and experienced from the men to whom he had ministered in a book, (The Choice Wine: 7 Steps to a Superabundant Marriage)

Steve began to presents the “mystery of the family” according to the “Three Wisdoms” of the Church – (1) harmonizing theology (2) with the findings of modern science (3) while providing a vision that touches the divine. In 2004, Steve developed That  Ma

n is You! men’s program, which quickly moved across the country transforming men, marriages and families. Independent research by a Faith Advisor to The Gallup Poll identified it as one of the most life transforming programs ever studied.

That Man Is You is coming to you soon! We will join together to take an honest look at the pressures and temptations facing us men today in our modern culture. That Man Is You! Applies a Scriptural vision of men and the overwhelming scientific evidence that supports that vision, to transform men who will be capable of transforming homes and society.

The theme that will be covered this fall will deal with the topic of “Leadership.” Topics include:

More details will be forthcoming but for now, here is some information:

The final area of Encountering Christ Through Scripture involved couples. Being married and especially raising children today is a tremendous responsibility with enormous challenges. We had a sense the couples need spiritual, pastoral and practical support. What we couldn’t discern was what couples at St. Monica need specifically. Is it a scripture study specifically aimed at couples? Should we offer John Paul II’s “Theology of the Body?” What about something in the form of “Pre-Cana” that married couples received as they prepared for their marriage or another type of marriage enrichment?  To be honest, we just aren’t sure right now. Thus we thought that the Lord might be saying, “Wait on this one.” With the roll-out of several new initiatives planned for the coming months, we decided to put this part “in the parking lot” for now, interact with couples, listen to their needs, ideas and experiences and see where the Lord leads us. I will certainly be open and supportive of conversations with couples in the parish about this. One stipulation: It would make no sense for me to plan, organize and run a program for couples. It’s not my specialty nor is it the sphere in which I should be focused. Any program would have to be scripture-based as well as planned and directed by the couples themselves.

From: Personal Ministry Updates
← Charlottesville: Are You The Answer – Or The CAUSE – Of Somebody’s Prayer? (Homily 20th Sunday Ordinary Time)
What Exactly DOES A Christ-Centered Relationship Look Like? (Homily 21st Week Ordinary Time) →
No comments yet